In a major step forward for the London 2012 Olympic Legacy, Joint Venture partners Lend Lease and London & Continental Railways (LCR) have won planning permission for 330 new homes set to be delivered at The International Quarter in Stratford – the first new private homes to be sold on Queen Elizabeth Olympic Park.

The 330 new homes, known as Glasshouse Gardens, are part of The International Quarter and will overlook the Olympic stadium, as well as the architecturally impressive Olympic Park Aquatics Centre. The news means that Lend Lease has now won planning permission for more than 1,000 new homes in Central London during the last 12 months alone.

Every home at Glasshouse Gardens will benefit from its own private outdoor space, giving residents spectacular panoramic views across Queen Elizabeth Olympic Park, the City and Canary Wharf. The first images of the new homes have been released today.

Arranged across two tower buildings, the homes will range from one to three-bedroom apartments, and will feature open plan living and kitchen spaces. The homes will form part of The International Quarter, a joint venture between Lend Lease and LCR to deliver a £1.3bn commercial and residential development in Stratford.

“Glasshouse Gardens will offer residents the buzz and excitement of an east London lifestyle, amongst the tranquillity and green spaces of the Olympic Park. Each apartment will enjoy breath taking views of the London skyline and will benefit from the extensive transport and green energy infrastructure put in place for the London 2012 Olympic Games. We are excited to be delivering homes which will become great places to live as well as forming a key part of the Olympic legacy.

“We have worked closely with the London Borough of Newham and the London Legacy Development Corporation during the design process as well as utilising Lend Lease’s global expertise in delivering benchmark sustainable residential developments. I would urge prospective buyers to look at the new images to get an idea of just how spectacular these new homes will look and feel.”

“It’s fantastic to see such progress. Glasshouse Gardens at The International Quarter is such an exciting prospect. It will be the first opportunity for people to buy a home in this new part of London and be a part of the Olympic legacy. With each new milestone, we are seeing a new neighbourhood come to life.”

Glasshouse Gardens’ location makes it one of the best-connected places in London. In addition to two tube lines – Central and Jubilee – there are also three rail networks, two bus stations and two DLR routes as well as the added benefits of Crossrail in 2018. Stratford is an eight-minute tube journey to the City, seven minutes to Kings Cross St Pancras and just 15 minutes to London City Airport, meaning residents will also be well connected to the rest of Britain as well as internationally.

The apartments will also showcase the latest in sustainable building practices and innovation. Each apartment will be constructed with the aim of maximising natural light and fresh air. The buildings will also feature green rooves for absorbing rainwater and providing insulation. These innovative features will mean lower costs for residents via reduced heating bills due to improved insulation.

Lend Lease has already begun work on another major regeneration site in Central London at Elephant & Castle. The £1.5bn regeneration will deliver 3,000 news homes and 160,000 sq ft of retail space as well as commercial and leisure space over the next 10 years. Lend Lease also won planning permission earlier in the Autumn for two new sites at Battersea comprising 200 units at Cobalt Place and Victoria Drive respectively. 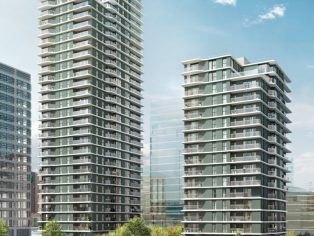