Leading the way for women in construction

Anita Harrison-Carroll, Head of Operations, at Sovini Trade Supplies in Merseyside, has been recognised as a trailblazer for women in the construction sector, after being named ‘Business Leader of the Year’ during the Women in Construction Awards 2015.

Anita fought off strong competition to win the prestigious national award, which was presented to her by host comedian, Katy Brand, during the ceremony at Lancashire Cricket Club on Thursday 26 March.

“I’m thrilled to have been chosen from the excellent nominees. Setting up a new business in this or any sector for that matter, is certainly no mean feat. And it couldn’t have been done without the ongoing support and patience of the team and the Sovini Group directorate, for which I am extremely grateful.”

Sovini Trade Supplies is unlike most businesses of its kind, with all elements of the business, from sourcing and purchasing, to supplying and serving, centred on the desire to do social good.

As part of the philanthropic Sovini Group, capacity generated by Sovini Trade Supplies will be reinvested in the group’s non-profit social housing partners, supporting their investment in new homes and developing the local communities.

The judges singled out Anita for her role in the growth of Sovini Trade Supplies and the wider Sovini Group.

Judge, Hayley Ellis, Director of training at the Federation of Master Builders, said:

“Anita’s personality really shone through in her entry. We really admired the way she has driven the business forward, and that she inspires the respect and admiration of her colleagues.”

The Sovini Group was also represented by Amanda Smith from One Vision Housing, shortlisted for Quantity Surveyor of the Year and Sovini Property Services, shortlisted in the Learning and Development category. 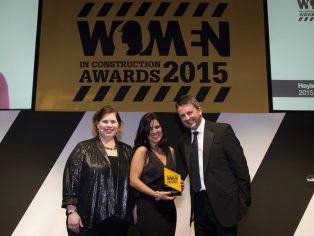