Commissioned by contract caterers, Chartwells, on behalf of Millfield, the brief to CDG was to design, install and completely refurbish the catering facilities for students aged 13-18, its staff and parents using the facilities out of school hours for social engagements and meetings. The space was required to cope with large volumes at peak times – 1,000 meals during the 45 minute breakfast service and 1,450 meals over the two hour lunchtime service.

The school enjoys a rich heritage which dates back to 1935, so it was important that the catering facilities showcased and celebrated its rich academic, cultural and sporting heritage, whilst delivering an individual and contemporary dining experience. The space had to be unique, mirroring the schools philosophy and engagement with pupils, by promoting a sense of pride and inspiration. For Chartwells, the brief was to deliver an efficient and flexible catering facility that would showcase the quality and breadth of the food on offer, whilst delivering a great customer experience.

A key part of the brief was to make queuing systems and customer flows as efficient as possible within the servery and dining area. The layout and the route through the space were re-configured, creating separate zones to improve the customer journey and increase operational efficiency. An ultra-modern servery was introduced with new features, such as a theatre station to celebrate international cuisine, a ‘grab and go’ area, bakery counter, together with counters to serve hot foods, salads and deli options and an eye-catching beverage station. To improve speed of service, the counters were mirrored on either side of the bakery. A state-of-the-art bespoke dishwasher was installed, that has the ability to process up to 19 trays per minute.

The design echoes the school colours, whilst drawing on its academic and sporting excellence. Feature drum lights were designed and commissioned which house the school’s ‘roll of honour,’ highlighting and celebrating the achievements of former pupils since 1935. A vibrant focal point has been created using a bespoke wall covering featuring Olympic host cities.

To add warmth to the space, materials were blended, such as ceramics and timber, with the addition of a stunning grey granite and contrasting cream stone counter tops. A huge glass screen adorned with the school crest separates the servery and seating areas. A mix of timber and slate effect floor finishes creates zones and a route through the space, whilst ceiling rafts sweep around the servery mirroring the curves of the counters to create a warmer, softer feel. Interest and texture have been added to counter fronts with the use of recycled bottles and end grain oak.

“Millfield was our largest project to date presenting many technical, operational and design challenges – however, we hugely enjoyed every minute of our time on site. We found creative and practical solutions to the issues raised by the client to deliver a combination of efficiency, practicality and the ‘wow’ factor. We’re of course especially proud that Chartwells has nominated Millfield as their flagship site within the education sector.”

“We required a catering facility that was truly unique – one that could deliver on so many levels. It had to showcase our rich and diverse heritage, deliver a contemporary experience, whilst also being able to promote a sense of pride and inspiration for pupils. Catering Design Group delivered in abundance, exceeding our expectations to create a catering facility which answered the brief and is very special indeed.”

Case Study from Rohan Slabbert, General Manager, Chartwells
The brief for Millfield was sent to three separate designers and CDG secured the contract because they correctly interpreted our brief and gave us confidence in them to not only deliver on the design elements of the project, but also in its execution with the management of the whole project.

In addition to the aesthetics, which required completely modernising as the catering space was about 15 years old, we also needed vital improvements to the flow, in terms of the customer journey through the space to ensure it delivered a memorable experience for pupils and was easy to navigate and use.

CDG cleverly re-designed the pass from the kitchen to front of house, opening this up to create open passes, where the kitchen can now see into the servery, which in turn, has hugely improved communication between the kitchen and front of house. We also have a really nice additional kitchen front of house, which is used as a preparation area for finishing dishes and carving roasts and all in full view of the pupils.

CDG delivered exceptional customer service throughout this project and more importantly, everything they promised they delivered. They listened carefully to the brief, and because they did, they got the design exactly right from the outset. They worked corroboratively with the client to evolve the project and took on board the feedback throughout. They spent a lot of time on site to really understand the schools rich academic, cultural and sporting heritage and get under the skin of exactly what the client both wanted and needed to achieve within the space.

Having been open for just under six months, I am delighted to say that Millfield is now a flagship site for Chartwells. Why? Because it was designed with the customer and the future in mind. The design has given us huge amounts of flexibility. Each counter can double up or triple up as something else and we are not limited with what we can do with the counters or the space. Innovation is at the very heart of CDG’s design, the space now has the means to evolve, whilst being sustainably run. Because it is such an open space, food innovations and new concepts can be rolled out much easier and our food now takes centre stage, allowing us to really showcase our offering. It just feels very real and authentic – our kitchen teams are where they should be, which has allowed us to focus on one of our key values which is about interacting, engaging and catering for pupils.

We’ve been using the space since September 2014 and the feedback we’ve received has been overwhelming. The pupils love the idea that we’re more interactive with them and they enjoy using the space because it feels very new and fresh.  We naturally took some influences from the High Street and it’s especially rewarding that they’ve picked up on this.

An important part of the brief was to encourage more female pupils to use the facility at supper time. Previously, they didn’t really like the space as it lacked any kind of warmth and atmosphere. Since the refurbishment we have been delighted to see a 20% increase in female pupils coming in for supper.  I wouldn’t hesitate in recommending CDG. 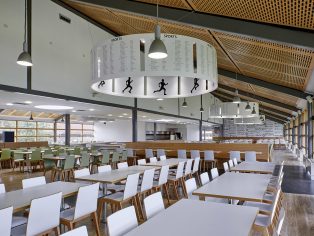