At a packed event held at the Institute of Directors on Thursday 7 June, EcoWorld International and Willmott Dixon officially launched EcoWorld London, bringing together two market-leading companies with a view to delivering over 10,000 much needed new homes across London and the South East. The launch signals a new era for housing – and reflects confidence from leading Malaysian developer EcoWorld International in the long-term potential of the UK economy.

The launch follows the recent completion of a significant joint-venture, whereby EcoWorld International acquired a 70% stake in Be Living, the residential development arm of Willmott Dixon. EcoWorld London will see EcoWorld International expand from its high-end projects with Ballymore, including Embassy Gardens, Wardian and London City Island, into the mid-market, with homes for Open Market Sale as well as Build to Rent.

The Malaysian-themed launch event took place at the Institute of Directors, Pall Mall, and was well attended by leading industry figures. Guests were treated to a traditional Malaysian drum performance by the EcoWorld Symphony Drummers, comprised entirely of visiting EcoWorld staff members.

Speaking at the event, Sir Edward Lister, the Chairman of EcoWorld London, commented:

“The capital is facing a chronic housing shortage. The launch of EcoWorld London will play a significant part in alleviating this, ensuring the delivery of much needed new homes that are accessible to those on middle incomes. For many, London remains the de-facto capital of the globe, and it is imperative that together we provide enough housing to sustain its future. By combining the construction and middle-market expertise of Willmott Dixon with the vision and EcoWorld International’s best in class international development experience and operations, the new entity is well placed to serve the local market and the broader international audience that calls London home.”

“London is the most important international market for the EcoWorld brand and we continue to firmly believe in the growth prospects of the residential property market here. Our substantial investment in EcoWorld London signifies our long-term commitment to build a strong and sustainable business in the United Kingdom. Working in partnership with Willmott Dixon, we aim to bring the best of all we have learnt as a developer operating in three continents to ensure that EcoWorld London projects benefit not just our customers and residents but also contribute positively towards the betterment of the surrounding community in which they are situated.” 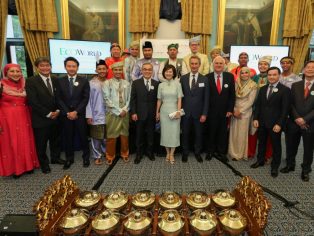