Monodraught has announced the next generation of its award-winning Cool-phase system, representing the company’s latest innovative application of phase change material (PCM) as a thermal energy store to actively ventilate and cool buildings.

Cool-phase is a low energy cooling, ventilation and heat recovery system that reduces the running costs of buildings while creating a fresh and healthy indoor environment without compressors or hazardous coolants. The system uses intelligently controlled phase change material (PCM) to actively ventilate and cool buildings, maintaining temperatures within the comfort zone, while radically reducing energy consumption by up to 90% compared to conventional cooling systems.

The improvements provided by the new generation follows an intensive and all-encompassing two-year development programme during which the Monodraught R&D team has applied innovative new design practises and some of the most advanced manufacturing technologies available to create ground-breaking improvements.

As well as dramatically reducing design and development time the programme has provided significant enhancements and improvements in almost every aspect of the Cool-phase system.

Key customer benefits of the new system include: a more stylish, compact, lightweight and stronger housing with fewer parts to provide much improved acoustic and thermal performance. In addition, almost unbelievable fan performance has been achieved to dramatically reduce energy consumption – cutting power usage during typical daytime operation to between 7 and 20 Watts. Typical running costs are approximately £20 per year and due to the reduced power consumption Cool-phase is now significantly quieter in operation!

The ability to design complex geometry for Cool-phase air flow components has optimised the flow of air to create a far more effective and efficient system with improved controls that also provide BACnet compatibility. Ventilation rates vary from 0.1 m³/s to 0.3 m³/s.

“Cool-phase has exceeded our expectations in terms of design, performance and energy efficiency and we are delighted that the second generation of system offers the building services industry such a dramatic improvement to any alternative ventilation and cooling strategy.” 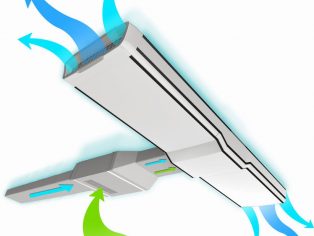