Housebuilder and developer Larkfleet Group (www.larkfleetgroup.co.uk) is launching a new company – one with echoes from the past of group founder and CEO Karl Hick.

The new business will be named Allison Homes (www.allison-homes.co.uk) and it will in many ways mirror the existing ‘flagship’ company in the group, Larkfleet Homes (www.larkfleethomes.co.uk). It will build a wide range of homes across the East of England and East Midlands, from starter homes for first time buyers through to large executive houses. A specialist division within the new business – Allison Luxury Homes – will design and develop bespoke individual properties.

“One of the things that has made Larkfleet Homes successful is that as a relatively small house builder we have been able to give personal service and real customer focus, paying attention to the small details that make a house a home.”

“But our success threatens those very characteristics. Larkfleet Homes is growing and, as it does so, it becomes more difficult for management to have that ‘hands on’ role which I think is so important.”

“So we are launching Allison Homes as a separate entity within the group. It will have its own management team and its own staff to ensure that it – and Larkfleet Homes – can continue to deliver the quality that we feel is so important.”

The new launch is a ‘rebirth’ for Allison Homes.

Karl Hick became managing director of a Spalding-based company trading under that name in 1987 when it was acquired by Wiggins GP PLC, a docklands property developer for which Karl was working at the time.

Wiggins, however, suffered serious financial problems at group level and extracted substantial cash from Allison as a result of which the company went into receivership in June 1992.

Karl knew that Allison was a profitable company trading under a successful and recognised name and he agreed a deal to acquire the business.

Over the next eight years the company grew from a zero turnover to £22 million at the time Karl sold the business for £30 million in October 2001.

A year later, Karl went on to set up what is now Larkfleet Group centred on house builder Larkfleet Homes.

Now, more than a decade later, Karl has acquired the rights to use the Allison Homes name again.

“Allison Homes had an excellent reputation for quality throughout the 1980s and 1990s. Now we are bringing that back to life as part of the Larkfleet Group.”

Larkfleet Homes has several developments across the East Midlands and East of England including Bourne (Lincolnshire), Baston and Pinchbeck (Lincolnshire), Oakham (Rutland) and Peterborough and Whittlesey in Cambridgeshire which offer plenty of choice for those looking to purchase a home.

Allison Homes will shortly be announcing its own first development sites. 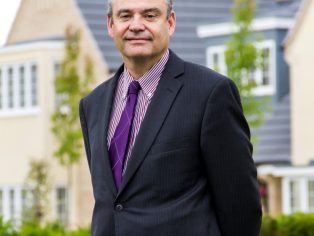