The Port of Ardersier, a former fabrication yard spanning 700 acres in Whiteness near Nairn, has been put up for sale.

The 700 acre site consists of 340 acres of developable area and a one kilometre long deep water harbour, which is protected by a sand and shingle spit.

Billed as a strategic development opportunity, the site has planning permission and adopted local development plan allocation for a variety of land uses including residential and marina, industrial, port related and associated renewable energy options.

“In the past few years, we have established a strong track record working in partnership with administrators and other stakeholders to recover maximum value from similar situations. This type of work requires detailed knowledge of planning, environmental and strategic issues, particularly with regard to the local area.”

“The Port of Ardersier offers a fantastic opportunity to purchase a large scale, remediated strategic site with a live planning consent for a mixed use development.

“Given the growth of renewable energy in the North of Scotland and the potential for an accelerated decommissioning of the oil and gas infrastructure in the North Sea, the site offers excellent medium to long-term planning potential for a variety of uses.

“Mixed development land opportunities of this scale are very few and far between in Scotland, particularly when set against one of the most beautiful backdrops in the UK.

“Once developed, the site will appeal to a wide range of potential buyers including international investors amid the increasing demand for renewable energy space”.

Port of Ardersier Limited was granted consent by the Scottish Government in August 2014 to bring the site back into use following the 2001 closure of the McDermott Yard offshore platforms construction site.

In 2014 the Highland Council granted planning permission in principle to establish a port or port services for energy related uses, having previously granted permission for a residential-led mixed use development incorporating 2,000 houses, a hotel, 500 berth marina and retail and leisure facilities.

The site is being marketed by Valad Europe and JLL on behalf of Blair Nimmo and Tony Friar of KPMG LLP who were appointed joint administrators of Port of Ardersier Limited, the owner of the site, on 1 October 2015. 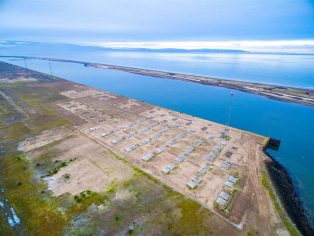