Clients, colleagues and partners both past and present were treated to an evening of reflection as well as a look forward to where not only Birmingham-based Fira but the sector as a whole might be heading.

Guests mingled and chatted on arrival before original founding partner, Jane Findlay and director, Jeremy Parker welcomed everyone. They then introduced a specially commissioned video which showcased some of Fira’s work over the last 40 years and its vision of a peoples’ landscape of modern Britain. This was followed by a presentation from architect David Lewis, a partner at NBBJ.

“It was a thoroughly enjoyable evening and we’re thrilled so many people were able to join us,” said Jane Findlay. “Any business that reaches the 40 year milestone is something to be celebrated and it was only fitting that Fira’s 40th was recognised. It was also an opportunity to look back on everything we have achieved in the last four decades; helping to create people-centric spaces in a huge variety of sectors.

“We were also delighted to welcome David, someone we’ve been privilege to work alongside over the years. It was fascinating to hear his insight into how masterplanning has changed and how the modern world has, and will continue to, affect building and landscape design. We have a great team of people at Fira and we are now looking forward to what the next 40 years will bring, starting with the opening of our London office on Cowcross Street later this summer.’

As they were leaving each guest was given a copy of a special commemorative 40th anniversary book Fira: 40 years of place-making. This takes a journey through the decades and the cultural, political and economic shifts that have influenced Fira’s work. 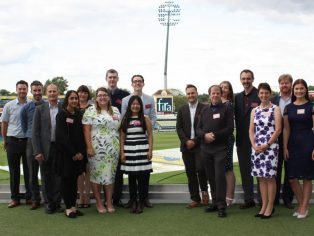