Landmark Estates starts with its first London site in Battersea

Landmark Estates, the residential and commercial property developer covering Dorset, Hampshire and Wiltshire, has made its first move into the prime London housing market, after acquiring a 0.3-acre site in Battersea, with a projected GDV of over £8 million.

Landmark Estates, who opened a London office in March this year, after having worked successfully on the south coast for 15 years, has completed on the purchase of 56 Chatfield Road, Battersea, London SW11 3UL. At the heart of one of the capital’s best connected riverside neighbourhoods, the site, a former office building, was bought from Alternative Networks Plc for an undisclosed sum.

The company, whose focus is on acquiring land and developing both residential and commercial schemes, will now start discussions with the London Borough of Wandsworth to create a residential scheme with 11 private apartments. Work is due to start on site in January 2015.

Landmark is led by James Bradley, who took control of the business in 2007 from his architect father, Roger. The Landmark team also includes James Hemsley, who has been crucial to the company’s expansion into the capital.

“Our first acquisition in London reflects our ambition to take the company into new territory. Battersea is one of the most desirable riverside addresses in London and we are looking forward to developing some great waterfront homes where people will want to live. With a wealth of knowledge and experience, having spent a busy few years forging ahead, Landmark has great vision, which is backed by our long term investors. We are actively looking for more sites within West and South West London.” 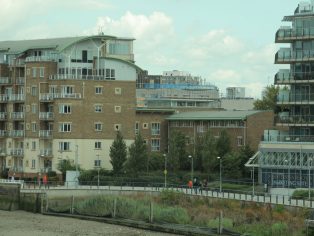