Annual price growth in Edinburgh was 3.1% in March, as momentum built ahead of a traditional increase in activity in Q2.

This relatively strong performance, up from 2% annual growth in December 2019, was aided by an increase in average property values of 1.7% in the three months of this year. This was the strongest rate of quarterly growth in Scotland’s capital since autumn 2018, with buyers and sellers responding to the end of a period of uncertainty after December’s decisive general election.

The data, which provides a snapshot of the state of the Edinburgh residential property market before the UK lockdown began, shows that annual growth in the first quarter of 2020 stood at 3.2% for houses and 2.9% for flats. House price growth has outpaced that of flats for each successive quarter since June . This has been due to a lack of family houses coming to the market but also family buyers frustrated by years of Brexit uncertainty – and with the prospect of Scottish independence receding for now – deciding to put their plans into action after December’s general election result. In contrast, investor sentiment cooled within the flats market during the period.

Growth was strongest for properties valued between £1m and £1.5m, with a 4% annual increase (see figure 1). This price bracket has consistently outperformed the main index, with the supply of family homes valued between £700k and £1.2m particularly constrained and limited opportunity for new development in the city.

Average prices for properties valued between £1.5m to £2m also increased 3% in the first three months of 2020 due to improving demand among buyers in higher-value price brackets and an increase in international interest. While the timing of the lockdown comes as the Edinburgh market was preparing for an increase in activity during the spring period, the underlying fundamentals of strong demand and constrained supply (see figure 3) will help support the market in the longer term, subject to labour market disruption.

Values in the New Town and West End area of Edinburgh increased by 3.1% on an annual basis. It remains the top performing area of the city measured over three-years with values up close to a quarter (24.2%) in this period. This is due to its status as the best known residential area in Edinburgh, which was developed in the Georgian era and is a a short walk from the city centre work and retail areas. However, the north of the city was the strongest performer during the first three months of 2020. Inverleith in particular, which has a mixture of Victorian terraced, semi and detached housing, remains a focal point for buyers. The city’s north region saw an annual change in values of 3.7%. in the first quarter of 2020. The area has seen average property values increase 19.8% in the past three years. 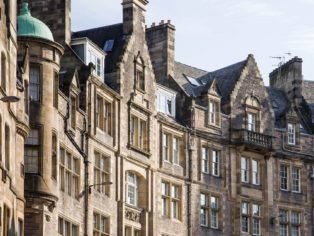