Knight Frank: Lethargy sets in ahead of Brexit vote in Prime Central London

Beyond the distraction of the EU referendum there are signs that demand is strengthening, says Tom Bill.

As the referendum on Britain’s membership of the European Union draws closer, buyers and sellers in prime central London have further grounds for caution in a price-sensitive market.

Demand remains relatively subdued but in a change from recent months, the primary cause in May was the Brexit vote rather than new rates of stamp duty.

Indeed, there are overlapping layers of uncertainty affecting supply and demand that are difficult to differentiate but which produce a cumulative impact.

There has been a discernible “Brexit effect” on the UK economy as decisions are delayed and the London property market is no exception.

Buyers and sellers are postponing decisions because of the prospect of entering unchartered economic and political territory.

The market has become price-sensitive due to higher levels of stamp duty, but an indication of the Brexit effect is that demand in May has remained subdued even for properties where asking prices have fallen by 10% or more.

Demand was already more restrained as a result of the impact of two stamp duty increases in the space of 18 months.

The ratio of active buyers per available property in prime central London has fallen to 4.8 from 10 over the last year, as figure 2 shows.

However, despite the looming referendum, there are signs underlying demand is strengthening as buyers drop asking prices to reflect higher transaction costs.

The number of transactions between January and mid-May was flat this year compared to 2015.

Meanwhile, viewings increased 31% between January and April versus last year, suggesting a degree of pent-up demand.

Annual growth fell to 0.1% in May, the lowest rate since October 2009. Overall, prices have grown 2.4% over the last two years and it has been three and a half years since annual growth was last above 10% in October 2012. 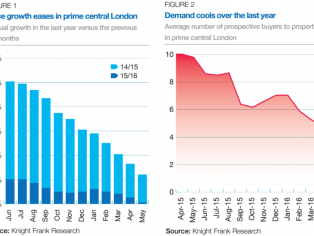