According to the data, households in all UK regions expected house prices to rise over the next 12 months with the strongest growth predicted in the South East.

Those in London perceived the strongest rate of price growth over the course of the month while households in Scotland reported the most modest rate of growth.

“The HPSI indicates that house prices are set to continue to tick up modestly in the coming months.

“The market is being underpinned by the solid economic recovery and ultra-low interest rates – which now look as if they will stay put for some time to come. However, a key dynamic of the UK housing market is that it is highly regionalised in terms of price movements, something which is highlighted by the HPSI.

“The average annual spread of future HPSI readings – the difference between the lowest and highest readings across the regions – reached a new high this month, with households in the South of England expecting stronger growth than those in the North. This signals that the regionalised nature of the market is unlikely to unwind in the short term.” 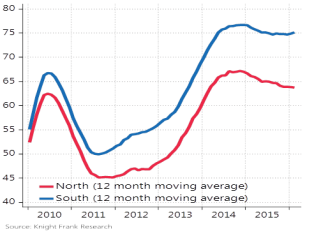