CEG and Feilden Clegg Bradley Studios secured the Project Award at this week’s national Housing Design Awards where the judges commended the contemporary design of the homes.

They particularly liked the unusual mews houses which use the topography of the site to deliver daytime living and garden space on the first floor and split-level studios and bedrooms above and felt the homes, combined with proposals for leisure, retail and office space, offer a smaller-scale trailblazer for the NHS’s Healthy New Towns programme.

The judges, which are made up of all five major professional institutions – RICS, RIBA, RPTI, the Landscape Institute and Chartered Institute of Architectural Technologists – went on to congratulate to planning authority Leeds City Council for securing the transport infrastructure and quality of proposals, to architects Feilden Clegg Bradley Studios for the designs and to developer CEG for the vision of Kirkstall Forge.

“This is the first award we have secured for the residential element of the scheme and to do so in light of the incredibly tough competition is great news.”

This week CEG and FCB Studios also discovered that Kirkstall Forge is the only development in England outside of London to make the shortlist for the World Architecture Festival Awards.

Up against 15 other worldwide developments in the masterplanning category, Kirkstall Forge is showcased against schemes in Moscow, Vietnam, Saudi Arabia, Oslo, Paris and Shanghai. The awards celebrate inspiring outstanding architecture. The winners will be announced at the three-day festival in Amsterdam in November 2018.

The World Architecture Festival is the only global awards where architects present their completed buildings and future projects live to a panel of internationally renowned judges from around the world.

“For Kirkstall Forge to be recognised on an international stage is testament to the hard work the team has put in to create something very special on this brownfield site.”

“From the delivery of a new railway station to the blend of contemporary architecture with traditional materials, this site is designed to bring to life a connected community for business, residents and visitors. FCBStudios has captured that with an inspiring design that maximises the green space and waterfront opportunity.”

“The inspiration for Kirkstall Forge is taken from local historic model villages such as Saltaire and the hillside terraced streets found in many Yorkshire towns. This reference to the best of the past is combined with a contemporary vision for a 21st Century neighbourhood making this new settlement both authentic and progressive. A beautiful urban village for a new generation to live, work and explore.”

The first commercial development on site, Number One, Kirkstall Forge, has scooped a hat trick of awards so far this year, including:

Number One will now compete as a category winner at the BCO and RICS national awards later this year.

Ultimately the £400million Kirkstall Forge 57-acre site will comprise 1,050 homes and 300,000 sq ft of high quality offices and 100,000 sq ft of leisure, shops and restaurants. The oldest continually industrialised UK site, its revitalisation intertwines placemaking, industrial heritage, sustainability, cultural values and quality, providing arguably one of the largest and most inspiring regeneration projects in the North of England. 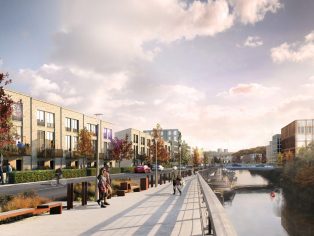