As one of the longest established and most widely respected building awards in the UK, the annual BDA Brick Awards recognise excellence in design and construction using brick.  This is the second year running that Ketley Brick has come away with major accolades.

Victoria Gate in Leeds scooped two 2017 prizes for ‘Best Commercial Building’ and ‘Innovative use of Brick & Clay Products’ and was also commended in the ‘Urban Regeneration Project’ category.

Designed by ACME, this landmark project forms part of Hammerson’s Victoria Leeds Estate in the city centre, developed and inspired by its local historic and architectural context.

Described by the judges as “intriguing and exciting” the new arcade is a building of impressive scale and complexity, with the decorative brickwork on three of its external elevations constructed using the very latest advances in digital technology and BIM throughout the design and production process.

Known for their high strength, low water absorption and exceptional frost resistance across all of their exposed faces, Ketley’s ‘Class A’ bricks were chosen for their performance characteristics and dimensional stability as well as their precise form and sharp-edged aesthetic, which was ideally suited to the geometrical design.

“Victoria Leeds is a great example of a contemporary concept made possible by the combination of modern and traditional brickwork techniques. The sourcing of the right brick was key to creating textured facades with intricate detailing, complementing the Victorian Leeds vernacular.”

“We are extremely proud to be associated with such an ambitious and impressive project, which has set a new standard for innovative design and building with brick.”

A masterpiece in design and construction, Victoria Gate has also been awarded:  RIBA National Award 2017, RIBA Yorkshire Award 2017 and RIBA Yorkshire Building of the Year, plus the Best Retail Project Worldwide in the 2017 WAF World Architecture Festival in Berlin and the Best New Shopping Centre at the MAPIC international property conference.

Ketley Brick manufactures a wide range of Class A bricks for both facing and engineering applications, as well as bricks slips, special bricks, clay pavers, quarry tiles and accessories. For more information about Ketley Brick call telephone: 01384 78361. Fax: 01384 74553. Email: sales(Replace this parenthesis with the @ sign)ketley-brick.co.uk or visit: www.ketley-brick.co.uk 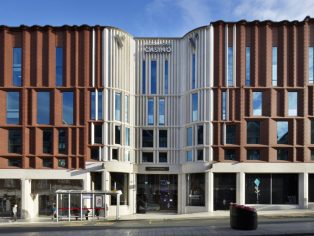