The new hospital is ground breaking in multiple ways, from being the greenest hospital in the UK (it is BREEAM ‘Excellent’ rated), through the first in Europe to be built in a park, to the first ‘cognitive’ hospital, harnessing the power of ‘big data’ with the latest in computer technology.

It was officially opened on June 22nd by Her Majesty the Queen and the Duke of Edinburgh, some nine months after the 63,000m2 precast concrete building with undulating wildflower meadow green roof and load-bearing facade was handed over following a construction programme of just over two years.

Kawneer’s AA®201 unitised curtain walling was specified especially to help with this aspect of the greenfield project as typically it can be installed in a fraction of the time of traditional or stick curtain walling.

The AA®110 stick system was used to flood with daylight the atrium concourse which forms the hospital’s public hub while the AA®201 unitised system performs the same function for the sides of three open fingers radiating outwards which alternate with gardens, intertwining building and landscape. Both curtain walling systems have nominal sightlines of 65mm and at Alder Hey incorporate red and blue coloured infill panels.

The brief to architects BDP was for a hospital that engenders well-being and raises patients’ and visitors’ spirits by adding to their quality of life, integrating the hospital and park for the therapeutic benefit of children, their families and staff.

The result is a unique concept, re-casting Alder Hey as the Children’s Health Park and creating a hospital without precedent, utilising the latest thinking on infection control, patient dignity and privacy, segregation of patient, clinical and facilities management flows, and technological advances.

Rising out of the park with its undulating profile, it makes it an instantly recognisable and a striking and iconic gateway to Liverpool, comprising 270 beds, including 48 critical care beds for patients in intensive care, high dependency and burns, together with 16 digitally-enhanced operating theatres.

“It was quite a challenge but I think we have delivered a world-class building. The trust claims it is the greenest hospital in the country, generating 60 per cent of its energy on site through the use of photovoltaics, CHP [Combined Heat and Power) and closed loop ground-source heat pumps.

“The main contractor Laing O’ Rourke was keen to have as much unitised glazing as possible to make the programme work but because of the geometry of the build it wasn’t possible to install unitised curtain walling everywhere so we had a mix of that and stick curtain walling.

“We also had a requirement for the sightlines to be as slim as possible and for there to be no difference between the stick and the unitised systems and that is what we achieved with the Kawneer systems and aluminium’s sustainability certainly contributed towards the BREEAM rating.”

“The client and architect have created something special here. Not only is this a complete contrast to the previous Alder Hey building, which still lurks next door as an institutional reminder of how most of us think of hospitals, it offers a new model for the design of children’s healthcare facilities far and wide.

“A hugely complex brief and a short delivery timescale were handled superbly well by the design team with an obviously tenacious and astute client team driving forward at every step.

“Despite some compromises, the team had managed to maintain the core strength of vision (the underlying theme was ‘if we’ve seen it before it’s not for us’) and the building provides a humanising yet professional backdrop to the life-changing dramas that unfold beneath its (undulating) roof every day. The land of remarkable people now have a hospital to match their aspirations and this project demonstrates how architecture can make a difference.”

View this five-minute video on the new Alder Hey, featuring interviews with Ged Couser, the interior designer and a critical care consultant. 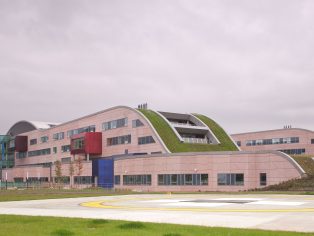