Elements from all of Kawneer’s portfolio have been used on the CUBRIC building.

Architectural glazing systems by leading UK manufacturer Kawneer were value-engineered as a major element of the second phase of Cardiff University’s Science and Innovation campus.

The new building is four times larger than the university’s old facilities, meaning staff from different departments now benefit from being housed under one roof, allowing for increased collaboration and innovation.

It continues to further the university’s world-leading research which has already established Cardiff as one of the UK’s top three universities for psychology, psychiatry and neuroscience.

Kawneer’s AA®100 curtain walling as zone-drained capped and SSG (Structurally Silicone Glazed) versions with 50mm sightlines help to form the terracotta-tiled external facades while the AA®110 version with 65mm sightlines has been used as rooflights.

These are joined by AA®541 top-hung casement windows as standard and as SSG vents, and by AA®545 medium-duty swing doors and series 190 heavy-duty narrow-style commercial entrance doors.

“We have used Kawneer before. It’s one of only a few systems we would specify.

“The entrance atrium is almost fully glazed and the projecting side wings were fully glazed so the correct solar treatment to the glazing played a big part. The Kawneer systems complied with the aesthetic and performance requirements of the project perfectly.”

“The Kawneer systems are a major element of the external facade and aesthetics of the building and aluminium’s sustainability played a major part as the building had to achieve a BREEAM ‘Excellent’ rating.”

Sensitive to the local vernacular, the design by IBI Group employs energy-efficient features including photovoltaics, a sedum roof and rainwater harvesting which helped achieve the BREEAM ‘Excellent’ rating. The building also achieved an EPC ‘A’ rating.

Research at CUBRIC is focused on four inter-related themes – imaging science, neuroscience, clinical research and neuropsychiatric genetics and genomics. This research aims to have a direct impact on understanding human health and well-being, including the brain changes that lead to disordered cognition and mental health.

Working closely with the core end user team, IBI developed a brief for CUBRIC and a design which responded to the needs of the users while crucially adhering to the masterplan parameters.

It was important to the university and the local planning authority that the Phase 2 building responded to Phase 1 of the development (the Hadyn Ellis Building also designed by IBI) to create a harmonious development. CUBRIC has been designed with this in mind and incorporates the same range of materials.

Through public consultation IBI was aware that overlooking of the 1930s houses opposite was a concern and the design of the building was developed to address this. The Kawneer windows onto Maindy Road are limited and open courtyard spaces have been created along the Maindy Road elevation. These have enabled the use of the extensive Kawneer glazing to provide access to light, views and natural ventilation for the users while reducing the risk of overlooking to the residents.

“In theory, it’s a simple box but the building had to be future proof. We’ve installed demountable curtain walling to the scanner areas which allows the university to move large equipment in and out as its research grows, without affecting the building fabric.” 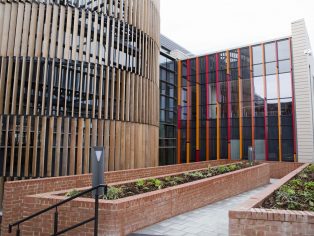