The couple, who moved from a two bedroomed flat in London to an Area of Outstanding Natural Beauty in Wiltshire, wanted their children to enjoy the same rural lifestyle they did. And that included never-forgotten features from Louise’s own childhood home, which Potton incorporated into the design.

“I’m quite sentimental and with Potton’s help we copied various details from the old house where I grew up – right down to an arched window on the staircase,” says Louise.

Simon, a managing director, and Louise, now training as a teacher, seized the chance to move from the city with their children Joe, now twelve and Miranda, ten, when Simon inherited a tumbledown house on 68 acres of land just outside Salisbury from his aunt.

Louise and Simon visited Potton’s Self Build Show Centre at St Neots, Cambridgeshire and worked with an in-house designer to develop a totally bespoke four bedroom design based on the company’s Rectory range, incorporating fine sash windows and a sweeping feature staircase in the Georgian style.

Potton handhold their customers through the whole process, with help and advice on all aspects from designing the house and gaining planning permission through to getting the technologies right for achieving an energy efficient home that promises lower running costs once the house is built.

“The house stood in a really beautiful and secluded country setting, but combined all the worst elements of boxy 1970s architecture,” says Louise. “We thought about extending and remodelling, but it was incredibly ugly and every builder who came to the site recommended that we should knock it down and start again.

“Symmetry was an important part of the overall look, and we are so impressed with the results. We were knocking down quite an ugly property and replacing it with a slightly larger traditional looking house, using handmade bricks and energy efficient technology, so the planners couldn’t have any objections.”

Every Potton build is assigned its own Customer Construction Manager to give help and advice throughout the project. Louise says:

“He was absolutely brilliant and offered a five star service. He visited us on site and was hugely knowledgeable and experienced – helping us to make all sorts of decisions right down to positioning the staircase.

“We ordered a joinery package from Potton, which included the bespoke windows, doors and staircase – all designed specifically for our house. Potton also suggested other manufacturers for comforts like underfloor heating.”

Louise’s father is the chairman of the York Handmade Brick Company, and supplied 20,000 specially selected Lindum Blend Bricks for his daughter’s new home. Louise’s experience of brick-making helped immensely as she knew exactly the look she wanted and how to achieve it.

Such attention to detail shines through in the finished house, which is why it was voted winner of Potton’s 2011 “Dream Home” awards. Louise sourced fireplaces based on a Queen Anne design from the beginning of the 18th century, and the pretty entrance door was modelled on a similar door, with nine rectangular panes of glass, which she remembered from her childhood home. 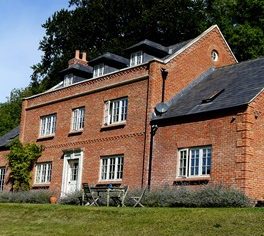 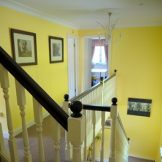 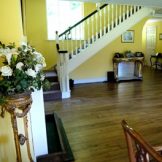