Stephen Minning, founder and managing director of one of Australia’s leading design and brand studios, will serve as Chair of the 2016 SEGD Global Design Awards jury.

Minning founded BrandCulture in 2003, and since then the Sydney-based firm has worked with a broad range of blue-chip companies and public-sector organizations on branding, experience design and wayfinding projects. The multiple award-winning firm has partnered with leading architects, developers and interior designers on work for clients including the University of Technology Sydney, Coca-Cola, Verizon Business, Telstra, Qantas and the Australian Government.

Minning has led his company integrating digital technology into client projects, and says Experiential Graphic Design should embrace the “disruption” that technology brings to wayfinding and other core practice areas.

“New technologies are allowing people to access information previously only existing in print. Journeys and experiences can now be enhanced with real-time information on mobile devices, beacon technologies are making contextual messaging possible, and technologies such as Near Field Communication and QR codes promote easy access to information and enhance accessibility for people with visual impairments.”

“The world is wide open for designers, who should be leading the charge to create true user-centered experiences.”

Since 1987, the SEGD Global Design Awards have honored Experiential Graphic Design work that connects people to place by providing direction, content and compelling user experiences in the places where they work, play, learn, travel, shop and connect. It is the most highly regarded international design competition for experiential design in the built environment.

Experiential graphic design continues to be enriched by digital technology and that won’t change. But beyond that, it should always be guided by Design Thinking and solid principles of design for user experiences. We’ve gathered a jury that, through its exposure to many disciplines of design, will ensure these principles are represented in the winning work.”

Entries to the 2016 SEGD Global Design Awards are due January 31, 2016, through SEGD’s online entry system. Winners will be honored during the 2016 SEGD Conference in Seattle June 9-11, 2016, and through SEGD media channels including SEGD.org and its Design Awards Annual (in print), with supporting social media. Submission guidelines can be downloaded on the 2016 awards page. To see the caliber of previous Design Award winners, take a look at SEGD’s extensive awards gallery online.

3M is the Presenting Sponsor of the 2016 SEGD Global Design Awards. 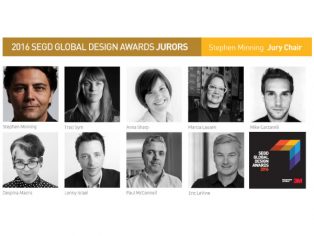