A site-specific 7-metre wood sculpture commissioned for the Courtyard of the National Gallery of Ireland.

Irish studio workshop Joseph Walsh Studio unveils its latest commission Magnus Modus, a large scale, seven metre tall, free-form sculpture made of multiple layers of laminated olive ash wood that will be displayed in the new Courtyard in the refurbished National Gallery of Ireland from 15 June, as part of the Gallery’s permanent collection. The latest addition to the Magnus Series, a series that challenges the perception that function demands an explicit use, Magnus Modus is commissioned by the Office of Public Works (OPW) on behalf of the National Gallery of Ireland under the Per Cent for Art Scheme, as a result of winning an OPW-initiated by invitation competition.

Magnus Modus will be the third large-scale installation of the Magnus series. Assembled and designed in a large warehouse, the meticulously crafted curved sculpture responds to the question of whether art can transcend history while simultaneously addressing the complex relationship between form and function. It encircles and engages the viewer, whilst expanding the creative language of collaboration between man and material.

Resting upon a small Kilkenny limestone base, the Magnus Modus delineates space in its slender aspect, stationed on a tiny footprint, reaching upwards and then outwards. As the sculpture ascends, it becomes lighter and reacts to subtle changes in atmosphere.  It creates surrounding spaces, shadows and delicate lines of movement, thereby transforming the viewer into an actor by its responsive presence.

“Magnus Modus is the culmination of all the pieces created during the past 15 years and the inspiration that went into designing them. This commission by the National Gallery gave me the opportunity to explore ideas around pure sculpture and translate them into a full scale piece. I wanted to create a sculpture that is very seductive in form and yet perfectly imperfect, as in nature where the supposed imperfections are the thing that create the unique character, the results of atmospheric shifts that ultimately alter and positively influence the material.Magnus Modus is the very reflection of my search for effortless design harmony.”- Joseph Walsh, Founder of Joseph Walsh Studio

Joseph Walsh established his Studio in 1999 on his family’s farm, which still hosts the original 18th century Walsh Farmhouse. Largely inspired by and appreciative of nature, his work is characterised by an ongoing curiosity about the dialogic possibilities of different materials and unison of form and functionality to create sculptural, one-of-a-kind pieces. The creative process behind these pieces is constantly fuelled by the Studio’s cooperation with teams of master craftsmen, as well as apprentices and interns, coming from all over the world to realise Walsh’s design vision. 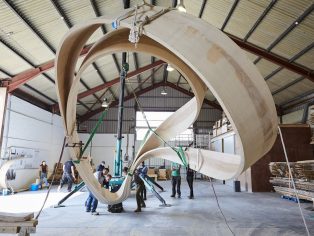 'Making of' Magnus Modus, commission for the National Gallery of Ireland © Andrew Bradley