The Center for Early Education, designed by Johnson Favaro, has completed its first new building – phase I ­– and broken ground on its second new building ­­– phase II – after almost two years into a 3 ½ year comprehensive redevelopment of its 2 ½ acre campus in West Hollywood, CA. The two new buildings will replace two existing buildings in various locations on campus as well as adjacent recently purchased commercial and residential properties.

The new project on La Cienega Boulevard and Clinton Avenue will connect as additions to an existing third building. This will create a single four story 100,000 SF building housing 540 students and 110 faculty and staff. In addition to classrooms and instructional support spaces for children ages 2 through 6th grade, the project at completion will include new below grade parking, rooftop playgrounds, a new ground level gymnasium, and a play field.

“The architecture of the new campus is inspired by the spontaneous expression of children’s art – folded and cut-out paper, alphabet building blocks, brightly colored surfaces, simplified, almost child-like profiles of things found in nature like trees and flowers.”

The project is a model of compact development as an urban campus in a rapidly urbanizing area of southern California.

The recently completed first new building – the “La Cienega Building” – faces onto a busy commercial arterial running north to south from West Hollywood into Los Angeles.  At ground level, a 90 FT long vitrine houses a public installation by world-renowned artist, Friedrich Kunath, who worked with Center students to create the piece for dedication to the West Hollywood Urban Art Program. At upper levels, parent work and social spaces, such as the multi-purpose meeting room and third floor terrace, orient out to La Cienega Boulevard.

The second new building – the “Clinton Building”– currently in construction, will house all the early education programs at the ground floor, with kindergarten, first and second grades at the second floor, administration at the third floor, and rooftop playgrounds at the fourth floor. This building will serve as the main entrance to the entire school and will feature a five-story atrium that connects a vestibule at the new below grade parking garage to the rooftop playgrounds at the fourth floor.

Completion of the redevelopment project is slated for January 2020. 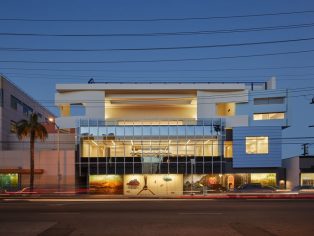