John McAslan + Partners (JMP) is delighted to announce that the practice has been selected for The Queen’s Award for Enterprise in International Trade for 2014.

“As an architectural practice, we relish the challenge of engaging with diverse cultural communities. It is a great honour to be recognised in this way.”

The Queen’s Award for Enterprise in International Trade recognises the practice’s significantly increased international portfolio. John McAslan + Partners is working on several prominent projects in Russia, including the ten-storey Electro commercial development in St Petersburg which will be Gazprom’s new HQ, and the transformation of the historic Bolshevik Factory in Moscow, the first phase of which completes this Spring; a subsequent phase will include a museum for Russian Impressionist Art. Other Moscow projects include five multi-modal Transport Hubs in Moscow and the Olympia Business Park which has won numerous awards and is now home to BMW’s Russian HQ.

Meanwhile in Qatar the practice is delivering 16 projects within the Downtown Doha masterplan, including a Cultural Forum, the five-star Mandarin Oriental Hotel, the Park Hyatt Hotel, a Mosque, a School and four Heritage House Museums, the latter completing later this year.

Their work continues to extend geographically – they are designing significant additions to the British School in Rio de Janeiro, as well as a masterplan for the Royal British Columbia Museum in Victoria, Canada, and the Anand Vihar Transport Hub in New Delhi.

They are also working on a luxury residential complex in Latvia, as well as a new community settlement west of Nairobi. The amphitheatre for the Kigali Memorial Centre in Rwanda (marking the 20th commemoration of the genocide) was officially inaugurated this month and they are currently designing school projects in Malawi and Uganda.

“While continuing to work busily in the UK, we have focused energetically on international new business development in recent years. Our overseas portfolio now represents 50% of our turnover, outstripping our 10 year business plan which had set a target of 45% international work by 2015. This strategy of significantly building our international portfolio of work means that we will expand this to 60% of total turnover by 2015, focusing on Asia, Russia, Brazil, China and the Middle East.” 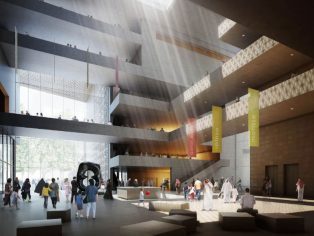 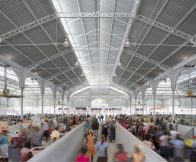