Cheshire Fire Authority is a step closer to realising its ambition of a safer Cheshire after appointing ISG to build a new fire station in Penketh, Warrington.

The company has now commenced construction of the Penketh station, which comprises a lightweight steel frame structure with a green sedum roof to complement the building’s location and enhance its sustainable credentials.

ISG has also been declared as Cheshire Fire and Rescue Service’s preferred contractor to build two other new stations in Lymm and Powey Lane, Mollington, close to the M56. Fire Authority Members will meet shortly to make a final decision on those contracts, which would bring the combined project value to around £16 million.

The Lymm facility is a five-bay fire station and safety training centre, which will combine a modern fire station, with space for five fire fighting vehicles, staff quarters, yard and fire training tower as well as an advanced training facility and Safety Centre.

Also planned is an eight-bay fire station close to the end of the M56 in Cheshire. The lightweight steel frame building with block, render and cladding elevations will house specialist firefighting equipment and rescue vehicles for use in industrial/chemical fires and major incidents.

“The North West Construction Hub continues to prove a highly efficient procurement vehicle to bring important front-line community facilities to site quickly and cost-effectively. The Hub also focuses on maximising the value of projects to drive social and economic benefit within local communities via training, apprentice and direct employment opportunities to create a lasting skills legacy.”

“We are delighted to be working with ISG on this exciting programme, which will ensure that we continue to protect communities across Cheshire. ISG’s commitment to creating training and employment opportunities for local people, their clear commitment to promoting equality and diversity and their vast experience of working with blue light services were key factors in our decision and we look forward to seeing the benefits of the project.” 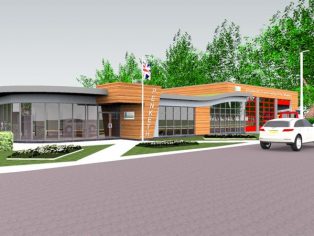 Visualisation of the new fire station in Penketh

The station has been designed to sit sympathetically within its surroundings