ISG has successfully completed a series of projects for United Airlines at London Heathrow’s new Terminal 2, The Queen’s Terminal, which was officially opened by Her Majesty The Queen on 23rd June, 2014. As part of the Terminal 2 project, ISG assisted with the creation of the 22,000 sq ft United Club and United Global First Lounge – the carrier’s only facility of its type in Europe.

The United Club is the first outside the U.S. to feature the new United Club design concept. Customers at the United Club can enjoy the 25-seat full-service bar and two buffet areas. The Global First Lounge features a wine room, a buffet area and a tea lounge.

Customers using either the Global First Lounge or the United Club can refresh themselves in one of eight spacious shower suites. Other amenities include complimentary Wi-Fi and private phone booths.

Featuring the highest quality materials sourced from across the globe, the lounges include a number of iconic furniture pieces and vintage aviation-themed artwork. A contrail design motif features across curved white Corian walls and continues on the glass doors leading to the shower suites. The Global First Lounge includes a scale replica of the Big Ben clock face produced by Dent, the original manufacturers of the London landmark at Parliament Square. Other bespoke elements of the Global First Lounge include a cylindrical private wine room complete with a circular 147 bottle capacity wine tower, custom-built and installed by ISG, and a quiet zone with couches and privacy drapes.

Located in Terminal 2’s satellite concourse, the project involved the logistical and technical challenges associated with working in a busy, live construction site environment alongside the base-build contractor. A major pre-cursor to the commencement of fit out work was the introduction of approximately 100 tonnes of structural steel work to provide the core infrastructure for the new facility. As part of this primary phase, ISG installed advanced mechanical and electrical services, as well as a host of back of house facilities.

“ISG has delivered a significant volume of work within Heathrow’s new Terminal 2 building for United Airlines, which includes creating a world-class departure facility that provides an international showcase for our high-end construction services solutions. The exceptional quality and design ethos underpinning the new departure lounge substantially raises the bar in this premium sector and it is incredibly rewarding to hear the highly positive feedback United Airlines is currently receiving for these impressive new facilities.” 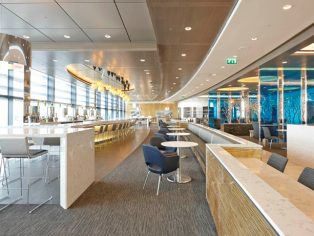