The project is the continuation of ISG’s partnership with the quintessentially British luxury brand, which has seen the contractor deliver over 40 projects for Hackett London across continental Europe and Asia over the past four years.

The new three-storey outlet, opposite Hamley’s toy store on Regent Street, was delivered following a transformational, 13-week fast-track fit out programme, which included the creation of a magical woodland themed kids’ department in the building’s basement. Adding to the technical complexity of the project, the design incorporated a feature steel and stone staircase with oak handrail running through the centre of the store from basement to first floor level.

The distinctive and high quality fit out reinforces Hackett London’s British brand spirit with wood flooring and stone feature walls, traditional cornices, high skirting boards and exquisite wall coverings. The first floor sales area features a bar adjacent to the cash desks and a giant LCD screen is visible from the staircase as customers make their way up through the building.

ISG has also recently returned to Hackett London’s Boulevard des Capucines store in Paris carrying out a refit of the store that marked its first ever project for the fashion brand in 2009. This scheme closely followed the completion of a refurbishment of Hackett London’s Passage Royale store also in the French capital.

“Regent Street is the latest in a series of flagship Hackett London store refurbishments completed by ISG over the past four years, including outlets in Paris, Milan, Frankfurt and Hong Kong as well as the UK. This complex project included major structural alterations to the existing building to accommodate the new feature staircase and has seen the rationalisation of a floor of office space into the retail scheme.

“Our close working relationship with Hackett London, and early involvement in the project proved key to the successful delivery of the Regent Street store, which since opening has proved extremely popular, with great praise from both our client and customers.” 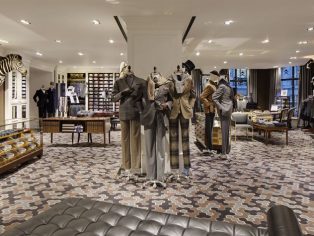 The high-specification fit out includes quality materials and distinctive décor