ISG Builds on Walking With the Wounded Support with Charity Cheque

Veterans who benefitted from the BBC’s DIY SOS ‘Big Build’ were reunited with representatives from Walking With The Wounded and Manchester City Council when one of the construction companies involved, ISG, returned with a donation of £5,500.

ISG’s Northern regional managing director, Danny Murray presented a cheque to Walking With The Wounded at the development to aid the charity’s ongoing work to support the employment aspirations and vocational outcomes of our wounded, injured and sick servicemen and women, those who have been physically, mentally and socially disadvantaged by their service.

The money was raised by staff at ISG, who were inspired by the company’s involvement in the ambitious Big Build project, which saw a derelict street in East Manchester transformed into homes for veterans and their families and a veteran support and advice centre.

A raffle supported by the entire project supply chain raised £2,470, thanks to the generous donation of prizes from many of the companies involved, and ISG’s project manager Barry Corbett raised £3,030 from a sponsored 10K run, which he managed to complete in 59 minutes, despite taking part straight after a busy week spent on the DIY SOS site.

“The East Manchester scheme was the biggest Big Build ever undertaken by the DIY SOS team and was a genuine collaboration between the programme, Walking With the Wounded, Haig Housing, Manchester City Council and all the many contractors, consultants and organisations involved in making such an ambitious scheme happen over such a short period of time.

“We were proud to be part of the initiative but recognise that there remains so much more that can be done and this donation is just the start of that commitment.”

ISG is now liaising with Walking With The Wounded to develop training and work experience opportunities for veterans on its projects, coordinating skills support via its own supply chain. The first work placement is expected to be at the company’s Belle Vue Sports Village project in East Manchester.

The company will also be taking part in Walking With The Wounded’s ‘Walking Home for Christmas’ campaign, which will see people around the world walking home between 12th-26th December in support of homeless veterans.

Edward Parker, CEO of Walking With The Wounded said:

“The aim of the scheme in East Manchester is to create a veteran’s housing community within the existing community, where training and employment opportunities can be developed for both new and existing residents.

“The first phase of this vision has been delivered thanks to the Big Build, with a facelift to all 62 properties, disabled access and parking improvements to the street and refurbishment of eight of the 25 vacant properties. We couldn’t have achieved so much without the support of Manchester City Council and the many companies and individuals that gave their time and skills to the project and we’re now looking forward to building on those relationships as Haig Housing deliver refurbishment of the remaining 17 properties in phase two.

“We’re delighted that staff at ISG have been inspired to offer us their continued support by fundraising for Walking With The Wounded and we look forward to involving the company in future projects.”

“Manchester is a city that is fiercely proud of its industrious past and its sense of community and the whole nation was inspired by the way the Big Build encapsulated that heritage in a single project.

“By engaging the public, private and charity sectors to work together we’ve achieved something extraordinary and we’re pleased to see that the scheme’s delivery partners are continuing to support a brighter future for veterans.” 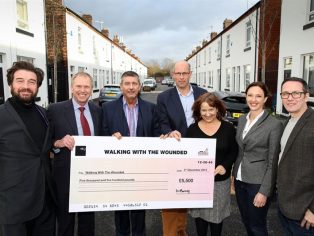 ISG Builds on Walking With the Wounded Support with Charity Cheque