In the heart of Dublin’s beautiful city a brand new historical and interactive museum has opened its doors. Based on the traditional and vivid history of Dublin’s industrial past, specifically of alcoholic beverages and a long association with the drinks industry, Ireland’s first whiskey museum opened in autumn 2014.

The museum features a series of exhibitions detailing the history of whiskey distilling in Ireland through the use of interactive technology and actors. Visitors also have the opportunity to sample the Irish whiskies in a special tasting room.

In the summer of 2014 W&Co was approached by two Irish companies, MJ Architecture & The Irish Pub Company, to supply an LED feature lighting display for the museum’s tasting room. Our knowledge and expertise were utilised to produce a 14 metre wide LED feature wall.

After two months of manufacturing trials and preparing translucent vinyl swatches, the client decided to use a warm orange filter film to be applied to the LED panels to increase the warmth of the lighting. The light panels were supplied with LEDs mounted to both long edges, along with a dimmable transformer to power all the LED light panels simultaneously.

The store officially opened around autumn 2014 and has been a huge success and is expected to generate around 80,000 visitors in its first year. The project was an overall success the comments were very positive from the client. Sean Ryan, interior design at MJ Architecture wrote,

“I am very happy with the finished result of the whiskey wall, it conveys exactly what I intended with the design concept. Many people have commented on how great the effect is so thanks for your assistance on the project.” 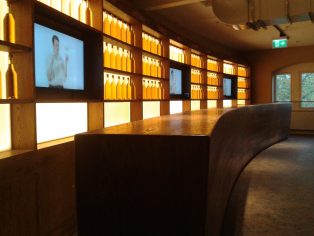