Dun Laoghaire Lexicon Library and Cultural Centre, Dublin, has won both the Overall Excellence Award and the Sustainability Award in the 2015 Schueco Excellence Awards. Organised by Schueco UK in conjunction with RIBA Journal, these awards, now in their second year, aim to recognise the very best in the design and installation of Schueco systems.

The winning €29.5 million, 6,327 m² building, designed by Cork practice, Carr Cotter Naessens Architects, was described by the judging panel as ‘a beautifully made, beautifully crafted building that looks like it’ll be here for a long time. An excellent piece of architecture’.

Mainly naturally ventilated with the help of exposed thermal mass, solar shading and high floor-to-ceiling heights, mechanical ventilation operates only in the art gallery and auditorium. There is a heat transfer system for heating and cooling and the concrete frame contains up to 50 percent recovered material, reducing the amount of Portland cement required in its construction.

A key overall design priority of the client, Dun Laoghaire Rathdown County Council, was longevity so the architects built in a minimum design life of 60 years for components and 100 years for the building structure.

Officially opened in April, the Dun Laoghaire Lexicon Library and Cultural Centre is now fully operational. Main contractor for the project was John Sisk and Sons, while Billings Design Associates were the consultants for the main façade. 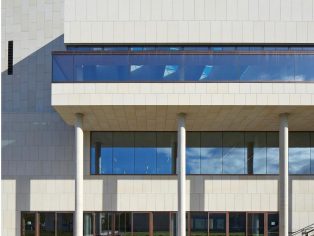