Howe Farm designed by IPT Architects was declared the Supreme Winner of the 2016 Surface Design Awards on Thursday 11 February.

Howe Farm, designed for a private client and located in Buckinghamshire is a subtle and unassuming dwelling. It is a practical farmhouse with low visual impact and is in-keeping with its surroundings.

The exterior explores the use of simple black stained larch cladding panels in various configurations. This clever arrangement allows the surface of the building to vary from solidity to transparency and in-turn creates ever changing shadows.

The judges praised the accomplished use of material that enhanced the building in its setting, describing the treatment of the roof as artful and with a number of judges proclaiming ‘I want to live there’.

The Surface Design Awards recognise examples of progressive design and the use of innovative  surfaces in projects both in the UK and internationally.

Named as finalists for the 2016 awards were 32 projects with 40 per cent of shortlisted projects being from outside the UK covering an extensive 12 countries.

Each project was judged on a range of criteria including the type of surface, the use of materials and aesthetic design. 13 winners were announced from 7 different categories with most categories being divided into both an interior and exterior section.

With project admissions including private residencies, hospitals, restaurants, and even a sewage works the judging panel had a difficult task in selecting the finalists and winners of each category.

The range of exciting and creative projects inspired an animated debate on the virtues of each project from the panel with projects described as ‘stand out’, ‘modern’, ‘unusual’ and ‘strong’.

The judging panel was co-chaired by Sarah Featherstone of Featherstone Young and Theresam Dowling of FX Magazine.

Other judges all of whom are experts in their field were Andrew Waugh of Waugh Thistleton Architects; Anna Breheny of Scott Brownrigg Interior Design; Chris Jenkins of Peldon Rose; Diana Cochrane of Kent School of Architecture; Michaela Matheson of BDG Architecture + Design; Xavier Llarch Font of The Decorators and Sharon Stammers and Martin Lupton of Light Collective. 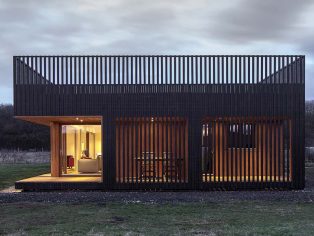