A joint venture between Interserve Plc and Shanks Group Plc has entered into an agreement with Derby City and Derbyshire County Councils to build and operate a new waste treatment facility in the city under a 27 year, £950 million Public Private Partnership (PPP) contract.

The project will be delivered by Resource Recovery Solutions (Derbyshire) Ltd (‘RRS’), a special purpose vehicle (SPV), which has agreed funding terms on the transaction and will now begin construction of the new facility. RRS has been providing interim waste management services to the residents of Derby and Derbyshire since 2009 working with the councils to secure planning permission for the new facility.

The new facility is expected to divert up to 98 per cent of residents’ residual waste from landfill, while also generating enough green electricity to power approximately 14,000 homes. This electricity will be supplied to the national grid, offsetting the cost of the waste treatment to the Councils.

Non- recourse debt funding of up to £195 million is being raised by RRS through the UK Green Investment Bank and two leading international banks; BayernLB and Sumitomo Mitsui Banking Corporation.

The new facility is expected to be completed by April 2017, at which point Shanks and Interserve will each inject £18m of subordinated debt into the SPV.

The contract will make a significant contribution to the local economy: approximately 250 people will be recruited to work on construction and a further 34 permanent positions will be created once the facilities are operational.

“This facility will help both councils significantly increase their recycling rates, reduce the amount of waste being sent to landfill sites and boost Derbyshire’s local economy.”

“The county council is facing massive budget cuts and our current landfill bill is one we cannot afford in the future. We do not know how much landfill will cost in coming years but it certainly won’t cost less than it does now. This waste treatment facility will give us certainty about the cost of managing waste in the future, help us to manage our budgets and protect us from future rises in the cost of landfill – including Landfill Tax which is currently set at £80 a tonne.” 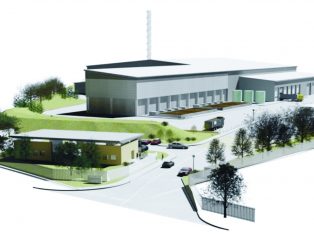