Major international interdisciplinary architecture and engineering practice, BDP, has announced the opening of a new studio in Leeds following the delivery of a series of successful high-profile projects in the city. The studio will be led by Architect Associate, Vicky Casey, who has relocated from the business’ Sheffield studio

The practice, which has opened its Leeds base in Bruntwood’s Platform building, now employs over 300 staff across its Northern studios, which includes an additional new studio in Liverpool. BDP’s expansion follows a strong year for the business in which it achieved a 21% increase in global turnover to £107m, with a £9.5m pre-tax profit. In Leeds, the business is aiming to combine the company’s global expertise with the extensive local knowledge developed in delivering a series of award-winning projects in the city.

BDP was the architect and engineer for the refurbishment and redevelopment of Merrion House, the 1970s office building which now provides modern office accommodation for 1,900 Leeds City Council staff in the heart of the city, and has already been awarded two RIBA awards. The practice was also lead-architect for the restoration of The Round Foundry, part of the ongoing regeneration of Holbeck and the wider Leeds South Bank district – one of the largest regeneration projects in Europe. The project saw the world’s only surviving first-generation engineering works turned into a mixed-use development, including apartments and affordable housing.

The practice has also been very involved in the early development of Leeds Teaching Hospital NHS Trust’s masterplan for the extensive re-ordering of the Leeds General Infirmary estate, which includes the significant expansion of services for adults and children, and formation of a new R&D sci-tech zone integrating with the Leeds Innovation District, being developed to the North of the city centre.

With over 18 years of experience in the industry, and having lived in Leeds for over 14 years, Vicky Casey brings local knowledge and a passion for the city to the role as office lead.

Commenting on the opening of the new studio, Vicky said:

“Over the last 50 years, BDP has worked on some fantastic projects in Leeds. With a number of new schemes underway and in the pipeline for us, we felt it was the right time to set up a permanent presence here. The city is thriving, and opening a new studio will allow us to further expand our work in the region and marks the start of an exciting new chapter for the business. As a Leeds resident, I’m hugely excited about building a successful team in my home city.”

Sue Emms, Chair of the North at BDP added:

“We are delighted to announce the opening of our Leeds studio, which has been a long-held ambition of the practice and an integral part of our national expansion plans in recent years. The Leeds studio has been set up to build on our already established reputation across a number of sectors and further develop our relationship with the city.

“We now have five studios in the North of England and look forward to bringing our global expertise and track record of delivering high quality complex projects to the market in Leeds.”

The UK remains a buoyant market for the international practice, with it forecasting that the UK will deliver around 70% of its income over the next three years. 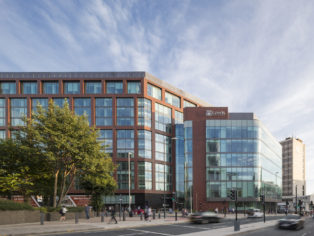