Robert Halvorson, SE, PE, FASCE, FIStructE, Executive Vice President of Halvorson and Partners (based in Chicago, Illinois) has been named winner of The Institution of Structural Engineers’ 2016 Gold Medal.

Bob, as he is known by most, is an industry leader in the structural design of high-rise buildings and long-span structures. Over the last four decades he has engineered more than sixty buildings of forty stories or taller, including Wells Fargo Plaza (formerly Allied Bank Plaza) in Houston, 111 West Wacker in Chicago, Torre Caja Madrid in Madrid, Burj Mohammed bin Rashid Tower in Abu Dhabi, and Hanking Center in Shenzhen.

Bob began his career with Skidmore Owings & Merrill (SOM), serving in their Chicago, Houston, New York, and London offices, becoming the firm’s youngest partner at the age of 31. Bob founded Halvorson and Partners in 1996, growing the firm to a staff of nearly seventy professionals within a decade. Under Bob’s leadership Halvorson and Partners merged with WSP | Parsons Brinckerhoff in 2015.

Bob said of receiving the award:

“To use the British expression, I am gobsmacked! I had no inkling or expectation of this award, and I was in shock for quite a while after being informed. Looking at the eminent past winners of the Gold Medal, I am very thrilled and honoured to be considered worthy. I very much look forward to giving my Gold Medal Address to members of the Institution in the summer.”

“The Gold Medal is our most prestigious award, recognised around the world as a mark of unique accomplishment in the profession. It was first presented in 1922, to Professor Henry Adams, and since then recipients have included Felix Candela, Ove Arup, Oleg Kerensky and Edmund Happold.

“We are very pleased to add Bob to this distinguished list, recognising, among his many other achievements, his extraordinary creative ability and his unique contribution to the structural design of tall buildings.”

For more information on the Gold Medal visit The Institution of Structural Engineers website www.istructe.org. Additionally visit hpse.com to learn more about Halvorson and Partners – a WSP | Parsons Brinckerhoff Company. 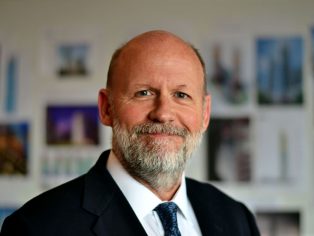