The Institution of Structural Engineers elected three new Honorary Fellows on 16 January during a ceremony at the Institution’s new International Headquarters at 47-58 Bastwick Street, London.

“The structural engineering profession is at its most successful when it works collaboratively with others. In 2015 we are pleased to recognise, through the award of Honorary Institution Fellowship, the immense contribution Angela Brady, Peter Bonfield and Sir Ray O’Rourke bring to the wider built environment sector through their energy, vision and leadership.”

“I am delighted to receive the honorary fellowship from The Institution of Structural Engineers. It makes me very proud. During my time as RIBA President I worked closely with Institution Past President, John Nolan, on the #DropTheBan campaign, which promoted the excellent skills of the British architects and structural engineers who worked on the 2012 Olympic Games, helping to record their great achievements for posterity.”

“I greatly admire the longstanding positive impact The Institution of Structural Engineers makes on engineers around the world, who play such a critical role in upholding construction standards, driving innovation and making sure that our buildings and structures are of the best quality, perform well over time, and are safe. It is a great honour to now be part of the Institution and I look forward to finding ways to contribute to its continued success.” 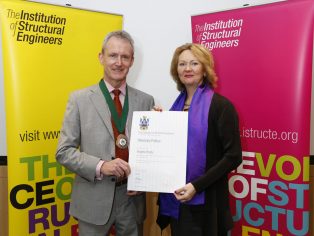