The developer of a major regeneration project in the heart of Edinburgh has revealed its new India Quay development could boost the local economy by more than £30m over the next three years.

The figures released today by The EDI Group Ltd, alongside a set of new CGI visuals of the scheme, highlight the economic impact of building its India Quay development at the former McEwan’s brewery site in Fountainbridge.

The first phase of the £200m development which has now been submitted for detailed planning consent, will transform the under-used site into a modern mixed-use neighbourhood of canal side apartments, shops and businesses.

EDI’s masterplan will deliver the largest build-to-rent scheme in Scotland to date and includes 438 mixed tenure homes and apartments, alongside a hotel, as well as cultural, office and retail spaces with a selection of cafes and restaurants on offer.

The first phase of the development will create 250 jobs in Fountainbridge, rising to 1,250 when the whole site has been developed. The first phase will also generate 140 construction jobs. When completed, India Quay will contribute more than £30m to the Edinburgh economy.

Councillor Gavin Barrie, Chair at The EDI Group Ltd, said: “These latest economic impact figures highlight how important India Quay will be for growth, investment and job opportunities in the city, especially in the creative and cultural industries and in the retail, tourism and hospitality sectors.

“Bringing an under-used site back into community use will also deliver innovative living opportunities for local residents and workers at a time of need. India Quay will be a quality addition to the Edinburgh’s iconic built environment and create a vibrant destination to attract additional visitors to the capital.”

Working with Edinburgh-based 7N Architects, EDI’s detailed residential plans include a range of one, two and three bedroom hi-spec apartments as well as 112 affordable homes. The three bedroom homes will be built in the traditional colony style, a favourite of the Edinburgh family market.

All of the homes will be professionally managed in a single ownership build-to-rent model and will be aimed at the entire market, from young professionals to families and downsizers, providing high quality living and communal spaces, gardens and services.

Lynn Smith, Head of Development at The EDI Group, said: “With more graduates and city workers looking for flexible city living opportunities in light of mortgages being tightened after Brexit, the build-to-rent model is a positive solution and India Quay will cater for this need.

“We feel Edinburgh offers the most exciting opportunities for this market in the UK. The site’s close proximity to Haymarket Station and the expanding Exchange office district also make it a suitable location for investors in search of a unique proposition in the capital.”

The first phase of the India Quay development on land west of Gilmore Park will also include:

“It feels very satisfying to see the project reach this important milestone. 7N Architects has been developing the proposals for the site with EDI over the last four years and the place making principles established with the local community in the masterplanning workshops at the outset have all been carried through to detailed stages. It is rare to see a major development in Edinburgh cultivate such strong spectrum of support and goodwill.” 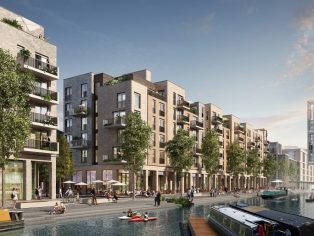