Mitsubishi Electric has released the results of independently audited data from year-long trials into the performance of its market-leading, Ecodan® air source heat pump system at 23 sites around the UK.

The results show that Ecodan achieved an average seasonal performance of 2.9 when measured against the Government’s preferred boundary condition for calculating heat pump performance – known as the Seasonal Performance Factor (SPFH4).

The EU defines the renewable threshold as an average seasonal performance of 2.5, when measured against reduced boundary conditions covering the performance of the heat pump in isolation (known as SPFH2).

SPFH4conditions widen the monitoring by including all auxiliary power consumption and this gives a much clearer indication of overall system performance. 15 of the Ecodan sites also achieved an SPFH4average of 2.98 across the winter of 2011-2012 – one of the coldest on record for decades, and seven of the sites achieved an average of 3.04.

“These tests measured all auxiliary power consumption as well as that of the heat pump itself so it gives a much more accurate indication of the overall performance.”

As calculated by the Energy Saving Trust (EST), Ecodan demonstrated average estimated annual operating cost savings of 8% over a gas condensing boiler, 36% over an oil condensing boiler and 67% over a direct electric heating system.

Estimated carbon emission savings of 21%, 41% and 67%, respectively, were also demonstrated and the EST report also shows that after future grid decarbonisation, these carbon savings rise to 85% over gas and 88% over oil.

The data collected by Mitsubishi Electric from the trials, was audited and analysed by the EST using exactly the same methodology as Phase Two of the EST’s own year-long trials into heat pump sites in the UK, which has been recently announced.

Both trials measure to the Seasonal Performance Factor (SPFH4) standards, which is the set of conditions preferred by the Department of the Environment and Climate Change (DECC).

“Many heat pumps on the market report high performance levels that are based on a static factory test condition and although these are useful comparative tools, they are no substitute for real world performance data.

“We would always suggest that anyone looking at installing a heat pump should request the SPFH4data from the manufacturer to provide a real comparison on performance before making a decision.”

The SPF calculation takes into account not only the heat output from the heat pump, but also any auxiliary electrical booster including the immersion heater and divides this by the electrical input to all of the power consuming elements of the system.

The Ecodan trials took place in 23 homes across the country in places as far apart as North Wales, Cornwall, Cumbria, Yorkshire, Bedfordshire, Northumberland and the Isle of Wight.

The results also show that the design and operation of any heat pump system will have an impact on its performance levels. Adds Kellett:

“The EST is the UK’s leading organisation in helping people save energy and is widely respected for its independence.

“We wanted to put our systems through the same rigorous independent testing so that we could prove how well they perform all over the country and in a wide variety of properties.”

Further information on the advance range of renewable heating solutions can be found at heating.mitsubishielectric.co.uk or by calling 01707 282 880. 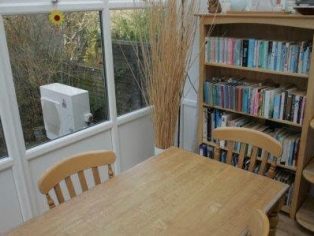