The Independent Hotel Show is dedicated to championing the freshest talent in the hotel design industry and this year is no exception. The annual Hub design competition, supported by Bridge for Design, offers the leading lights in the sector a chance to showcase their vision and expertise in the creation and design of The Hub, a key feature area of the show.

The Hub is an innovative and inspiring central networking area of the Independent Hotel Show, the only trade show in the UK dedicated to the needs and aspirations of the independent hotelier. The Hub design competition invited specialists to create a space that visually pushed the boundaries of interior design, sparked debate and offered an inspiring yet functional place to conduct business.

The winning design for 2015 was submitted by Daniel Bryan-Harris and Amal Yusuf, of architecture and interior design practice Jestico + Whiles’ award-winning hotel design team, which has a global reputation for designing some of the world’s most prestigious hotels including W Hotel London, Andels Lodz in Poland, the Yas Hotel in Abu Dhabi and the recently completed Hard Rock Hotel Ibiza.

The winning entry was decided by an esteemed panel of judges including Vanessa Brady OBE, Founder of the Society of British and International Design, John Legg, Editorial Director of Gearing Media Group, Mike Stiff, a qualified architect and Founder of Stiff + Trevillion, Andrew Linwood, Head of Design at Areen Hospitality and Daniel Hopwood, Owner of Studio Hopwood Ltd and President of the British Institute for Interior Design.

“Jestico + Whiles had the most interesting and well-presented design. It starts with a strong narrative concept – the whimsical relationship between the British and their weather – which is clearly extrapolated throughout the various major design elements: umbrellas, rain projections etc.”

“Jestico + Whiles really seem to have grasped the thought process with inspiration, functionality and compliance, then adding specialities and finally raw talent”

Commenting on their vision for The Hub, James Dilley, Head of Interior Design and Hospitality at Jestico + Whiles says:

‘‘Jestico + Whiles has chosen to focus on sense of place through the English obsession with the weather. Mundane as this may seem, when taken into a new setting, it can become a celebration of Englishness.”

“A glowing rainbow will signpost the Hub and the rainfall on a window will enforce the Hub’s role as a retreat from the hustle and bustle of the show. Suspended umbrellas, once the very signature of Englishness, create an abstract chandelier.’’

Visitors to the show can see Jestico + Whiles vision for The Hub brought to life during the two-day event. Held at Olympia West on 20 and 21 October, The Independent Hotel Show and The Hub offer a wealth of ideas and inspiration for the forward thinking independent hotel owner. 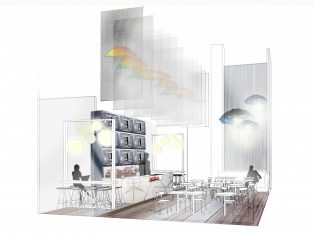