Impey has dispelled the myth that contemporary design solutions for modern lifestyles can’t be incorporated into older properties by installing one of its wetrooms in an almost ‘impossible’ location; a disused lift shaft in a 900-year-old house.

A new wetroom was created within the space of a disused lift shaft using a number of Impey’s innovative, leak-free wetroom solutions.

Firstly, Impey’s Waterguard was chosen for this project to tank the wet-floor area because it guarantees a leak free solution which is crucial in a setting like Forde Abbey where original features and antique ceilings would be impossible to replace if damaged.

Impey Waterguard is the next generation in wetroom waterproofing systems as it ensures a faster and easier method to applying the membrane. Once the Waterguard is applied, the fleece membrane, which features a one-sided self-adhesive butyl rubber backing, does not need any curing time which means tiles can be laid straight away.

To add to this, Waterguard comes with pre-formed corners making the process even more straight-forward and time-efficient. It’s also extremely durable, consisting of a Copolymer based sheet that can be used with epoxy grout and solvent based sealers which are not suitable for bitumen-based waterproofing products.

“Impey’s Waterguard created a watertight barrier which will ensure that no water escapes when the wetroom is in operation, so it was ideal for the job especially for a period property like this. The family did not want any more leaks and yet they needed somewhere to shower. The fact that you don’t need to leave Waterguard to cure was appealing too because it meant the tiles could be laid straight away, saving time and money.”

Impey’s Aqua-Dec EasyFit floor former was selected for installation into the new wetroom within a lift shaft as it is simple to use, supremely strong and reliable with a built-in 15mm gradient that requires no under boarding.

The Aqua-Dec EasyFit has a precise edge thickness of 22mm which allows it to slot alongside existing floor boards so that the wetroom floor doesn’t need to be manually formed.

“Using the Aqua-Dec EasyFit floor former meant that we didn’t have to manually form the floor and this made the whole process of fitting the wetroom much quicker and simpler. It also turned out to be a much more cost-effective way of installing the new wetroom in a lift shaft!”

The Aqua-Dec EasyFit is also fitted with a unique, patent protected drainage feature which has a 360 degree rotating centre section, allowing joists and pipes to be easily avoided if they are obstructing the drain aperture. This can significantly reduce installation time and makes the process simpler to undertake.

“From a practical perspective, one of the best things about the Impey wetroom in the old lift shaft is that there haven’t been any leaks, which is really important in this type of property.” 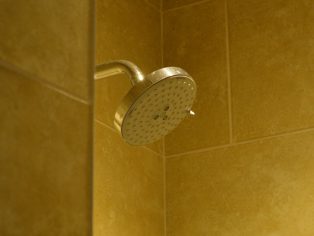