Liverpool’s iconic ‘Bunker’ Building – the former headquarters of Littlewoods – has been commended for its architectural excellence at the prestigious Royal Institute of British Architects (RIBA) Awards and the British Council for Offices (BCO) Awards.

The building was re-imagined by architect ShedKM and developer Capital & Centric, and transformed into 20,000 sq ft of contemporary commercial space, by specialists in commercial construction Artez. The impressive development scooped the awards at last week’s RIBA award ceremony for the North West and the regional BCO Awards.

The once derelict Edge Lane site now houses commercial office space. Neighbouring buildings are also due to be transformed into film and TV studios, as part of the multi-million development by Capital & Centric.

Tim Heatley, co-founder at Capital & Centric, said: “This is a huge honour. We were thrilled to be shortlisted among some exceptional buildings, so being recognised for the hard work and thought that went into the Bunker building makes it all worthwhile.

“We decided to retain the concrete elements of the building and make a feature of them, both internally and externally, which has resulted in both beautiful design and an energy-efficient building.”

The ‘Bunker’ has had a colourful history since its commission by Sir John Moores – who built the Littlewoods Pools empire – in 1938. During WWII the building’s vast internal spaces were used for a range of wartime efforts. These included printing national registration forms using the existing presses and housing MC5, the government agency set up to intercept mail to crack enemy codes. It also became the headquarters of the Government’s Unity Football Pools throughout the war.

However, originally designed to store catalogues, the building fell into a state of disrepair following its closure in the 1990s and was in need of serious renovation.

“The ‘Bunker’ is an important piece of Liverpool’s history and so we were determined to preserve the existing structure. However, the design also incorporates striking contemporary details, such as vibrant yellow panels in between the glazed apertures, which gives an interesting contrast between old and new products.”

“The final result is a fantastic example of how we can bring old and new together to create a beautiful piece of architecture that will stand the test of time.”

The RIBA Awards, which sets the standard for great architecture all across the UK, has been running since 1966. 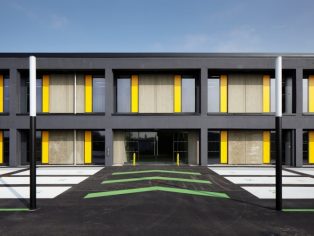