Earlier this month experts from across the property industry came together to reimagine what Marble Arch will look like in 2035. The ‘Back to the Future’ event was co-hosted by Houzen and Assael Architecture and led by experts including Alex Notay, Director of Innovation at Places for People; Anna Rose, Director at Space Syntax; Dr Michael Wells, Director of Biodiversity by Design; and Debra Yudolph, co-founder of SAY Property Consulting.

Split into four teams, the groups were asked to design a future concept for Marble Arch. Russell Pedley, co-founder of Assael Architecture introduced the session with a presentation on the history of the arch and the surrounding area. He spoke of the evolving use of Speakers’ Corner as well as the complexity of an area that encompasses a wide variety of uses alongside a mix of listed and unlisted buildings. Russell challenged the audience to think about how changes in transport, air quality, biodiversity and technology could change our perception, and usage, of the underutilised public space at Marble Arch in the future.

The first team, led by Alex Notay explored public transport and proposed improving the underpass and using a cyclical train to shuttle people around the more central areas. They also suggested transforming the central public space into prime residential and using delivery drones, which will be assisted by digital concierge services. For the public space, the group planned an open theatre near the arch, as well as pop up retail space in the underpass. An education hub for school children to come in and learn as part of an outreach programme will also form part of the plan, as well as a permanent fresh water swimming pool for visitors and residents. Roof gardens on the buildings north of the arch will improve the area’s green spaces, along with a biomass waste energy facility built in the car park below Hyde Park to power the local area.

Anna Rose, Director at Space Syntax, presented her team’s vision next. They imagined a much more intense use of the real estate at Marble Arch, with the continued growth of co-working spaces making offices more efficient. The area will become more vibrant and diverse, as well as more affordable for individual users. Night-time activity and longer hours of operation, particularly in commercial and retail spaces, will be prevalent. Traffic will be reduced due to the tech revolution in transport, with a focus on the ride sharing economy. A lot of the transport could also potentially move underground, increasing the pedestrian space above ground. The area could become a global destination, so it will develop its own unique identity, as well as become a place for social interaction. The team wants to see the park extended by opening up Buckingham Palace Gardens and the ground floors of the nearby commercial buildings in the manner of Somerset House or Rockefeller Centre so they can be used for events across the seasons. Better use of the river, as well as turning Speakers’ Corner into a democratic centre for Marble Arch with a museum on free speech, is also incorporated.

The third team was led by Dr. Michael Wells, Director of Biodiversity by Design. In 2035, the team said that people will be more attracted to the overall experience of Oxford Street rather than shopping. Therefore, they focused on making the area so amazing that people, globally, will travel to London to experience it. As buildings become taller and denser, they proposed to blur the boundaries between the park and the residential area and bring nature to the buildings in the form of vertical gardens or farms. These will be provided as a service to residents, not as an architectural function. In a world where we can change the environment around us at the click of a button thanks to virtual reality, we need something more in the park. They discussed using biophilic design to make the park truly stand out, as well as using technology to optimise all this change, rather than letting it happen organically. The regeneration of urban space must be modelled so that all components work together; therefore technology will play a significant role in the design and use of these spaces.

Finally Debra Yudolph, co-founder at SAY Property Consulting., presented her team’s findings. They plan to turn Marble Arch into a “switch off zone” where phones don’t work and people will be able to use the space to escape from the increased presence of technology in their lives. Transport will be radically different, with the roads being moved underground, making the arch more accessible. Technology will replace buses with an intelligent car sharing economy, where people will be picked up and dropped off at specific stops and transport will be linked to demand, with minimal waste. Marble Arch itself will have more greenery and water, and there will be pop up events and a digitalised Speakers’ Corner so that people can attend whether they are present or not. A virtual environment with a digital interaction will celebrate the area’s history, but this will be the only technological aspect of the design.

“The teams painted an extremely interesting and diverse picture of Marble Arch in 2035. It is evident that there is much space for improvement against its current look and usage, and that technology will unquestionably play a pivotal role in shaping and changing this. From the analysis of Marble Arch, we can draw a series of conclusions that are applicable to urban realms generally. We want the future to be more inclusive and diverse, and for technology to act as a unifying rather than dividing force, one that brings efficiency and delight to our daily lives. We want to create a sustainable future, where technology ensures that everybody wins.” 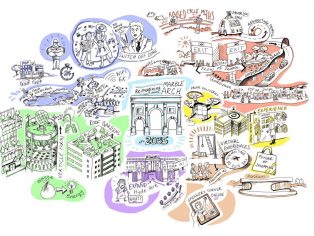