House No 7 in Scotland wins the 2014 Stephen Lawrence Prize

The considerately playful House No 7 on the Isle of Tiree in the Inner Hebrides is the restoration and extension of a B-listed Tiree black-house crofter’s cottage in a state of disrepair, into a contemporary family home and guest house united by a central glass atrium.

“House No 7 hails from a rich British tradition of buildings which are defined by the location of site and the traditional methods of vernacular construction. The rebuilt cottage and new living spaces cleverly wrap to create an intimate daylight space at its core. The result is an inventive play on typology; the small cluster of different components creates a new identity while sitting comfortably in the landscape amongst other small traditional buildings. It’s an intelligent and witty response to the functional and logistical challenges of location, orientation and isolation and worthy of the 2014 RIBA Stephen Lawrence Prize.”

The RIBA Stephen Lawrence Prize sponsored by the Marco Goldschmied Foundation, rewards the best examples of projects that have a construction budget of less than £1 million. The prize, set up in memory of the teenager who was setting out on the road to becoming an architect when he was murdered in 1993, is intended to encourage fresh talent working with smaller budgets. 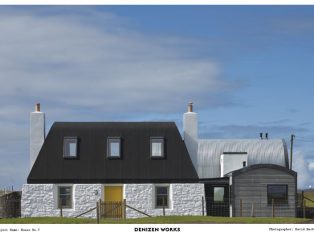 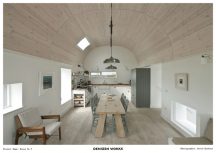