Spain’s Miguel Angel Jiménez, who made a hole-in-one during the third round of the BMW PGA Championship at Wentworth, took time out from the golf to visit the Mitsubishi Electric stand within the tented village at the four-day event

Jiménez, who is brand ambassador for Mitsubishi Electric called to cheer on the All Beans No Monkeys team, who will row the Atlantic later this year when they take part in the Tallisker Whisky Atlantic Challenge.

Crew member and Mitsubishi Electric Heating Product Manager James Timbs-Harrison, says: “Jiménez was leading the field when he took time out to visit us and he was very impressed with the challenge facing us”.

James and his fellow crew members, Liam Browning, Stuart Markland and James Kendall will depart on 15 December 2015 in their specially named ‘Ecodan’ boat and will row continuously in two-hour shifts for anything between 60 and 90 days.

The Tallisker Whisky Atlantic Challenge will see the crew row 4,800km across the world’s second largest ocean from La Gomera in the Canary Islands to Antigua in the Caribbean.

Jiménez has won 21 times on the European Tour and has been a member of several victorious Ryder Cup teams. The 51-year-old finished the BMW PGA event on 15-under-par, joint second, behind winner Byeong-hun An.

His hole in one on the 154-yard second hole, which came a week after performing the feat at the Spanish Open, set a European Tour record of 10 and takes him past Colin Montgomerie’s total of nine.

James continues: “This is without doubt a challenge of a lifetime, but it is one which we are all looking forward to. A big part of this challenge is also raising money and awareness for our chosen charities and our goal is to raise £60,000, which will be split between the RNLI and Cystic Fibrosis Trust.

Further information about the crew and the challenge can be found at their dedicated website:www.allbeansnomonkeys.com 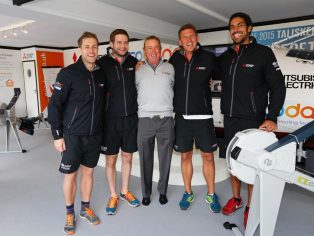