The second phase of St. Modwen’s Longbridge town centre development celebrates completion with the opening of Marks and Spencer, the site’s multi-story car park and a further 45,000 sq ft of retail space.

Within 10 years of the closure of the former MG Rover production plant, where 6,000 jobs were lost, the Longbridge development, including the new town centre designed by Holder Mathias Architects, has generated over 3,700 new jobs. It has transformed the local community, previously solely dependant on the car plant, into a vibrant, mixed-use sustainable community and won National Regeneration Project of the Year 2015 at the RICS Awards.

The concept for the development was to breathe life back into the area by undertaking the largest regeneration project in the West Midlands. Holder Mathias re-worked the original master plan, bringing its own urban design thinking to the scheme with a view to realising and delivering an aesthetic, functional and engaging town centre.

On completion, the scheme will comprise offices to cater for a range of businesses, such as TMT, corporate and company HQ, and combined with retail and leisure facilities will deliver a truly mixed-use environment. So far, the proposals form the centrepiece of a project that aims to bring social and economic regeneration with the creation of up to 10,000 new jobs and over 2,000 new homes over the next 15 years.

The scheme is unique in that it is exclusively private sector funded with much of the work carried out during the downturn of 2008; a factor recognised by the RICS Awards panel. The aesthetic quality of the scheme has been a significant aspect throughout the development of the project – something that has been key in attracting the right tenant mix for the people who live and work there and to strengthen the status of the area. As a result, high end retailers such as Marks and Spencer are an important addition to the scheme.

“When embarking on a project of this scale, it is important to develop ideas that are commercially viable and able to attract the prospect of cross-sector job opportunities. It is however equally important to create places and environments where people will want to spend time, where they look forward to going to work and where they will choose to spend their leisure time.

“It has been a privilege to have been involved in the Longbridge regeneration story – and we haven’t finished yet. The opportunity for Holder Mathias to work so closely with St. Modwen, who bucked the trend during the downturn and breathed new life into a place that was deemed redundant, and who, as a result, supported the future of the local community and beyond, has been a key factor in its success.”

“The completion of Phase 2 marks a significant milestone in the creation of a new town centre, and for the wider regeneration of Longbridge.

“Holder Mathias played a crucial role in visualising not only how the scheme could look, but also be delivered at a practical level to complement the existing infrastructure and its surroundings. We’re delighted that the company has been recognised for the National Regeneration Project of the Year award, highlighting the overall success of this landmark project.” 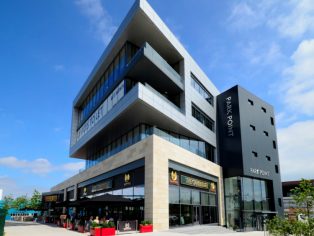