Harlequin floors are feline friendly on the set of ‘Cats’

Harlequin Floors, the global leader in advanced technology flooring for dance, performing arts, entertainment and events is delighted to have played a significant role on set for the recent production of the eagerly awaited film adaptation of Andrew-Lloyd Webber’s stage show ‘Cats’.

Filmed at Warner Bros Studios in Leavesden, Hertfordshire, and featuring a star-studded cast of international singers, dancers and actors, the upcoming musical drama film is set to storm the box office when it is released on the 20th December by Universal Pictures.

Based on ‘Old Possum’s Book of Practical Cats’ by T.S. Eliot the film is directed by Tom Hooper, his second musical film following 2012’s Les Misérables, choreographed by Andy Blankenbuehler and has Steven Spielberg as executive producer.

Over 550m2 of Harlequin Liberty panels were hired for the set giving the cast a safe sprung floor on which to practice their lifts and jumps. The sprung dance floor panels were then covered in Harlequin Reversible Pro performance vinyl which helps prevent injury from slips and falls. Ballet barres and 15 mirrors were also bought from Harlequin to complete the professional dance environment in which the cast could train.

Jamie Stirling ‘Technical Development Manager’ at Harlequin visited the set and oversaw the installation. He said “working on projects of this scale and prestige, which are often technically challenging, is a real privilege, especially one such as this that combines film and performing arts”. 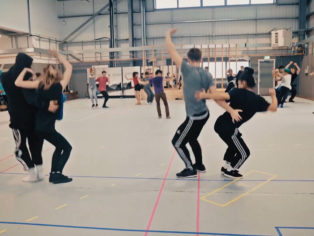