The contemporary two-storey building, which pays homage to the marine heritage of its location through design elements, industrial materials and rugged appearance, incorporates 28 shipping containers as key structures and internal ‘rooms’ which serve as private dining rooms or meeting spaces. Opened in November 2012, Hall & Woodhouse Portishead is in a stunning dock-side location, overlooking Portishead Quays Marina, a successful development built around waterside living.

“We are delighted to be recognised for our design in such prestigious awards – especially as we’ve come up against some strong competition. The building not only manages to meet the needs of our guests for various occasions but shows our ambition not to simply regurgitate the mundane ‘pub in a box’ but to come up with something original. We get some fantastic comments from guests and slowly Hall & Woodhouse Portishead is becoming a key part of the local community – fingers crossed for the final results in September”.

The awards are designed to celebrate the very best in restaurant and bar design. The winners of the Restaurant & Bar Design Awards will be announced during a ceremony at London’s Farmiloe Building on 12th September 2013. 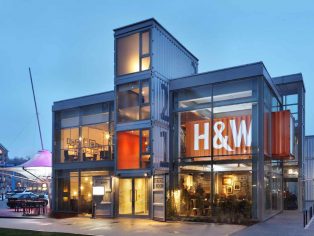