Five uniquely imagined guestroom concepts were constructed for the hotel community at Sleep in November when designers from Europe and Asia unveiled their Sleep Sets in response to this year’s ‘Science of Tribes’ competition.

This year, the question was: “What do we really know about our hotel guests and how well are we designing for them?”  The challenge saw a pioneering collaboration between international design talents and social scientists, with five teams of designers and fit-out contractors each creating a room for a global ‘tribe’ characterised by their shared values, lifestyles and aesthetic preferences as identified by the Sinus Institute social model.  The process was as considered as it was creative with an introductory workshop for all participating designers, led by directors of Sinus, followed by several months of concept and design development, international and local sourcing and then the final hurdle of building stands to bear the close scrutiny of visitors from across the hotel spectrum.

The winner was announced following individual presentations to the judges in front of the audience at the Sleep Conference, with the award going to the London team of global design practice Gensler for its innovative interpretation of local authenticity for its Digital Avant-Garde tribe. In a first however, the judges also decided to award a Highly Commended accreditation, which was given to Tokyo-based Mitsui Designtec for its beautifully crafted biophilic room design for the Established tribe.

Gensler
Designing for the ‘Milieu’ of resourceful and individualistic global nomads, Gensler created a guestroom experience to celebrate the experiential nature of the Digital Avant-Garde tribe – non-conformist travellers in constant search of new and enriching encounters, cultural engagement and inspiration. Gensler’s room was therefore conceived as part of a community-focused hotel located in an artistic urban neighbourhood, with a series of five overlapping spaces centring on a ‘social core’ that reimagined the traditional hotel lobby, lounge and bar. These spaces became stages for local creatives with their vibrant mix of hand-crafted furnishings and accessories, as well as on-site craft demonstrations by artisans offering one-of-a-kind experiences. Suppliers included: Modus and Artemide with Lichtvision; Mooi provided a “scribble rug”, Newmor a custom-designed wallpaper and Muzéo a bespoke artwork wall.

Mitsui Designtec
Designing for the status-conscious and well-to-do Established tribe, Mitsui Designtec created a guestroom replete with beautiful features and materials, but it was the experience of engaging with all the senses which offered what this group most wants – something beyond that which money can buy. Spatial boundaries were deliberately blurred, between indoors and out and within the room itself, lighting was soft and calming, a large soaking tub took central stage and an amenity closet, “A Five Senses Library”, provided for every guest’s sensory gratification. Key suppliers included: Hypnos, Laufen (W.C. & washbasin), Tom Faulkner (coffee table) and @aroma for the diffuser which filled the room with scents.

Studio Proof
Performers are the high-achievers and the economic elite of the Sinus Milieus, and it fell to London-based Studio Proof to create a room for them. The team’s approach was to create a fictitious member of the tribe and, by developing her story, to imagine a room for her. The result was a guestroom full of ‘perfect’ details to meet the expectations of this most demanding group. It was a very modern space where every element was considered, finishes were of the highest quality and a “minibar for the mind” contained four cryptically entitled boxes: “The Thinker” (perspectives on life), “The Romantic” (poetry of life), The Explorer (maps of treasure) and “The Artist” (an aesthetic journey for the soul). Ulster Carpets supplied the rug, upholstery and curtains were from Bowden Tollit, Into Lighting provided all architectural lighting and Noir Saint Laurent marble was supplied by DBM Contractors.

WOW Architects
Designing for Intellectuals, a tribe of culture-seekers and critical thinkers, Singapore-based WOW Architects created a space in which guests can make the most of the luxury of time. This was a room where design norms were overturned to pose the question: “Which is your preferred reality?” The bathtub was the focus of the room – a place for contemplation and recharging – the desk was reinterpreted as a cosy window-side seating area, the W.C. became a library and a living wall and fish tank brought the natural world inside. The bed was placed on the ceiling, yet seen through a concave wall mirror, it reverted to being on the floor. Amongst the many suppliers for this room were SICIS (mosaic & glass tiles and feature lighting); Mobil Fresno (bespoke furniture designed by WOW); Havwoods (hardwood timber panelling); Drummonds (bath tub & sanitary ware); and Giopato & Coombes.

Aukett Swanke
Designing for experience-driven individuals who reject traditional social conventions, the London office of Aukett Swanke created a completely immersive environment for the Sensation Oriented tribe – people who rarely stay in hotels, prefer to travel in groups and want to escape into event-based experiences.  The designers conceived the room as a ‘bivouac’, a temporary dwelling, and drew on ideas of landscape and topography to consider how people adapt these for their social purpose – with shapes, textures and colour palette defining gathering and personal spaces within. While the room was a complete internal environment, this was a design that naturally lends itself to larger temporary settlements. Suppliers included:  Laufen, Dornbracht, Lutron, Mike Stone Lighting, Altfield and Pierre Frey.

“The chance to work with five top design studios from across the globe was a great opportunity. It showed that consumer research, and in particular our SINUS lifestyle model, is more than just a description of reality. The Sinus-Meta-Milieus releases creativity for designers, using consumer insights as the foundation for imagination and experimentation as well as the means of always remembering whom the ideas are actually developed for.”

Member of the judging panel, Andrew Linwood of Areen Hospitality, spoke of the responsibility of his task.

“Judging the Sleep Set was challenging. The theme of ‘Tribes’ effectively meant that each studio had a separate brief and so it was difficult to compare responses. However, the principles remained the same for each team – to reflect the characteristics, tastes and expectations of their tribe. In our assessment, two just edged ahead of the rest, with Gensler taking the lead due to their boundary-stretching approach and unusual ideas while Mitsui deserved a special commendation due to the extraordinary quality of their room. But I want to stress that all the designs were excellent in different ways.”

Dornbracht was the sponsor of the Sleep Sets; GROHE was the Founder Sponsor of Sleep and host of the VIP Lounge for the 11th consecutive year. Sleep’s official Event Partner is the European Hotel Design Awards. Next year, Sleep will be held on 21st and 22nd November in London’s Business Design Centre. Register your interest for Sleep 2017 at www.thesleepevent.com. 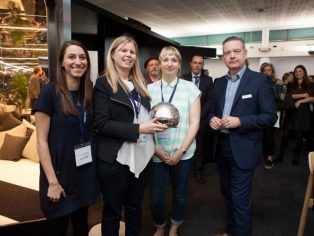 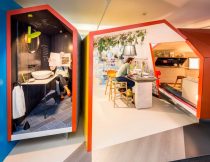