A groundbreaking ceremony for The Factory, a new flagship cultural venue for the UK, designed by world-leading architects Rem Koolhaas’ Office for Metropolitan Architecture (OMA), will take place on Saturday 8 July 2017 during this year’s Manchester International Festival.

Rem Koolhaas and his project partner Ellen van Loon will be at St John’s Manchester for the ceremony and they will also talk more about the project afterwards.

The Factory is OMA’s first major public building in the UK, a unique venue that will capture the extraordinary creative vision and breadth of Manchester’s cultural life.

It will offer audiences the opportunity to enjoy, in a new world-class facility, the broadest range of art forms and cultural experiences – including dance, theatre, music, opera, visual arts, popular culture and innovative contemporary work incorporating multiple media and technologies.

Manchester International Festival will be the operator for the Factory venue as well as continuing to deliver the Festival every two years.

The total capital costs of the project are £110m. The economic impact of The Factory will be considerable – creating or supporting 1,500 full-time jobs and adding £1.1 billion to the city’s economy over a decade.

Capital investment in the project was approved by HM Treasury in January. Local planning permission was also granted at the start of the year. 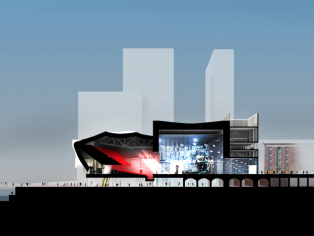