A ground-breaking Fife housing project designed to trial new eco-friendly methods of construction has won yet another award for its energy-saving innovations.

The £3.3million Housing Innovation Showcase, a joint project by Kingdom Housing Association and Fife Council, which produced 27 high quality houses at a site in Dunlin Drive, Dunfermline has attracted interest from housing professionals around the country and has already won five prestigious awards.

Now a sixth award has been added to the tally with a Green Business Fife Energy Award presented last week.

Last year over 2,500 construction and housing professionals visited the Fife showcase to see the new homes which were built by ten different construction partnerships using modern methods of construction to build energy-efficient houses.

The houses use a number of different insulation and energy systems aimed at cutting energy consumption and fuel costs to just £300 per year.

“The Housing Innovation Showcase in Dunfermline is unique, as it is the first time different construction systems have been developed on the same site, which will be compared and contrasted on a real life environment.

“We are delighted to win this award which is a real testament to all of the hard work and effort put in by our public and private sector partners.”

“The aim of the project was to demonstrate how alternative construction systems and new technologies could be mainstreamed into future projects and we feel this has been achieved.”

The Housing Innovation Showcase has already won an award from the Royal Chartered Institute of Surveyors along with a Scottish Green Apple Award for environmental best practice and a special VIBES award. It was also was recognised in the Scottish Home awards and the Fife Partnership Excellence Awards.

“This is great news for Kingdom Housing Association and for Fife. Ground-breaking projects such as the Housing Innovation Showcase highlights how alternative new methods of construction can deliver low carbon housing in the 21st Century and clearly demonstrates that Fife is leading the way towards a low carbon economy.” 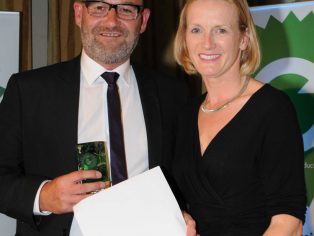