The building enables performing arts and music to be located within the same place. Inside, a range of specialist facilities and the latest state of the art equipment, including a new 200 seat theatre, dance studio and control rooms and studios, offer students the most inspiring, cutting edge facilities.

The art school includes a mix of new build and refurbishment. A four storey extension ties into existing floor levels while the existing four storey block has been refurbished.

The building’s clever surface art work, which is back lit at night, creates a strong metaphor for its internal activity. The artist behind it, April Virgoe – a teacher at the school for 16 years – said:

“What I wanted to do was convey something of the nature of the work that was going to take place in the building. The design is constructed from modular units that can be seen as architectural, but which also suggest simple paper forms like origami. On the longest section these tumble across the surface like the movement of a dancer across a stage.”

“The design has far exceeded our expectations. The building provides our learners with a space that nurtures and inspires their creativity while being practical and aesthetically pleasing in a contemporary and unexpected way.”

“To make a building’s artistic pursuit stand out, all the stakeholders felt the need for something of real creative and artistic endeavour. A great team effort has seen the creation of a visually striking building which provides outstanding facilities for both students and teachers alike.” 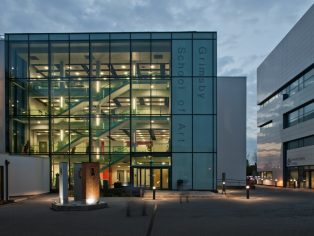