Greystones – homes your mum would be proud of

Selfbuilder & Homemaker meets builder Barry McGrath, who created the iconic, award-winning Greystones homes on a ‘building bombsite’ in the Hertfordshire village of Radlett.

Greystones is a gated development of two identical, detached, flat roofed and very contemporary properties, built by local builder Barry McGrath. However, the whole project started rather strangely when Barry got lost in the Hertfordshire village of Radlett and discovered what locals described as a ‘building bombsite’. Another builder had bought the land, was granted planning permission, then demolished the site’s original bungalow and started work on the new homes – but went bust.

Confronted by a huge site, unfinished earthworks and a partially built concrete structure Barry decided that McGrath Construction would finish the project. Buying the land for £2.1 million, and working with the original design produced by Nicolas Tye Architects, the plan was to build two properties and for Barry to move into one of them.

The second property was marketed towards the end of its construction phase and quickly sold for £2.5 million.

A constant learning curve
Picking up another builder’s architectural plans did prove to be a little tougher than Barry had envisioned. The unique and completely bespoke design of the homes meant that he had to work with specialist suppliers and solve new build challenges on a daily basis. This extreme hands on approach meant Barry had to stay on-site throughout the entire 18 months of construction.

The constant learning curve created by the highly bespoke nature of the homes certainly kept Barry on his toes. He explained:

“There were times when I thought things would have been a lot simpler if we had just knocked down the structure we were stuck with and started again. But that would have meant going back to the drawing board and could have added years to the build schedule.”

The first four months on-site were taken up simply clearing the vast area of abandoned land, moving tonnes of earth to create the required site levels and preparing the existing structure so the build work could actually start.

Contemporary homes
The hard work paid off. The finished homes are contemporary in their final appearance but were constructed using a traditional masonry build with all the rooms having solid partition walls and concrete floors. To support the sustainable nature of the homes all insulation was twice that specified by building regulations.

The properties’ exteriors still reflect elements of the existing neighbourhood with conventional white render, but in simple modernist forms. The render is complemented with western red cedar, which also helps with external solar shading, and the complete glazing system shapes the homes’ contemporary look. The red cedar and glazing also provides a practical combination of privacy and the opportunity to enjoy views of the local area.

Although the land had come with planning permission the McGrath Construction team still had to contend with considerable concern from neighbours who felt the new homes’ appearance would not fit into an address considered to be very exclusive.

“All the hard work with the building design had already been completed by the architects and the previous builder had successfully seen the project through the planning process. However, the proposed properties were very different to the other established homes in the neighbourhood. I also knew that local people were worried that the buildings they had seen in the architectural drawings had been likened to something out of War of the Worlds landing in their back yard. However, they had also had to put up with an unsightly building site for some considerable time and were just pleased to see the proposed properties finally built.”

The site’s contours allowed for the creation of the lower ground floor living space, facing out to the front of the homes. Once cleared the site’s extremely steep slope had allowed the buildings to avoid a conventional layout with the rear garden being level with the upper ground floor and accessed from the kitchen via a unique glass bridge.

The design of the highly flexible, lower ground floor living space both provides the access to the properties, through a specially designed hardwood door and large entrance hall, and the opportunity to individualise the 1,740 sq ft area. The space incorporates a master suite ‘wing’ option, which could include his and hers bathrooms or even a dedicated cinema room or gymnasium. Or it could be reconfigured to provide a granny annex or even staff accommodation. Barry used the space to create a leisure complex with a games room, sauna, steam room and gym.

The lower ground floor is linked to the upper levels of the house by a stunning atrium style staircase, with cantilevered, open walnut treads. The staircase and interiors, at all levels, are illuminated by natural light, which is drawn through a three-storey, glazed exterior panel and large roof top lantern feature.

The properties have also used minimalist design to create attractive, uncluttered living spaces with high ceilings and full height doors to add to the feeling of light and space.

Serious specification
When it comes to specification Barry made sure the properties incorporated all that a bespoke new home should boast.

To add a little kitchen-based ‘Vorsprung Durch Techik’ he employed Germany’s oldest brand, Poggenpohl, to create the fitted kitchens with German Gaggenau stainless steel integrated appliances, including a coffee maker and a Hydrotap that dispenses filtered chilled and boiling water.

The kitchens’ high quality Caesar stonework surfaces are complimented by soft-closing cabinetry and an integrated TV.

Barry’s love of easy-to-use technology meant that both homes have Cat5 wiring throughout. This supports the user-friendly air conditioning, mood lighting, automated window blinds, and a multi-room music control system.

Other features include an internal vacuum system, underfloor heating, security cameras and alarm system. These are complemented by feature fireplaces in the main living areas and master bedrooms, along with architecturally designed bespoke joinery, including wardrobes and general storage.

Porcelain tiles have been used in all the main living areas, including bathrooms, together with walnut wood flooring in other areas. The bathrooms also have high-grade sanitary ware with bespoke cabinetry and infrared sensors that flush the principle bathroom toilets. To add that extra luxury the master en suite bathrooms also have feature spoon baths, waterproof TVs and a steam room.

Low maintenance is the name of the game with the outside areas’ paved patio and decking, and the landscaped front and rear gardens’ carefully selected planting is watered by an automatic irrigation system. There is even space for a hot tub.

Award-winning
Barry’s confidence in McGrath Construction’s ability to take on the stalled Radlett development and the imaginative design created by Nicolas Tye Architects was also recognised when in 2011 the Greystones homes were shortlisted for the Hertfordshire Building Futures Awards.

Commenting on the design, specification and successful location of the homes within the existing community the judges said:

“The Greystones houses are a perfect example of how sustainable design can be intertwined effectively with modern amenities in a domestic setting.”

Even the sceptical neighbours have been won over. Although initially concerned about the new homes’ contemporary look they are also relieved that the ugly building site blot on the landscape that they had to live with has been converted into two very attractive, award winning and locally iconic properties.

“My bank manager thought I was either brave or foolhardy, and probably a bit of both. But I knew McGrath Construction was up to the task and that the finished homes are something my mum would be proud of.” 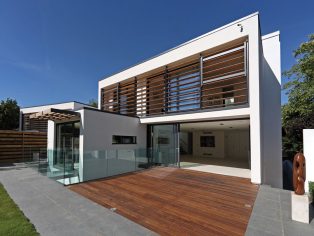 The contours of the site allow the entrance to be at a lower ground floor level, with the land sloping upward towards the back of the property 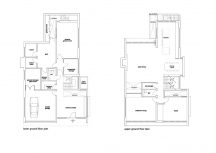