Communities Secretary Greg Clark will this week lead the charge for Whitehall departments to let go of surplus and redundant land and property for new homes – and for town halls to follow suit.

Speaking ahead of the first meeting of a dedicated ministerial Housing Taskforce, Mr Clark is urging departments to “loosen their grip” on sites that are standing idle so they can be released for new housebuilding, with a clear target to release enough land for 150,000 homes by 2020 – equivalent to the number of homes in Wakefield.

He is also calling on England’s 326 councils to follow the government’s lead and look at the land assets they hold, and use some of those plots, particularly those on brownfield sites, to provide new homes for their communities.

“The chance to own your own home should be available to everyone who works hard and aspires to. That is what a government for working people is about – making sure people have the security they need to build a brighter future for them and their families.

“The scale of our ambition is clear – to release enough surplus and redundant public sector land for 150,000 homes over the next 5 years.

“I want to see departments going further and faster than before, starting right away, to loosen their grip on sites that are standing idle and to turn them over for house building.

“Councils are significant landowners and town halls should be looking at their estate, particularly brownfield sites, and thinking about how they could make better use of their holdings by releasing land for new homes for their communities..”

“Housebuilding is at an 8-year high, with construction starts up 5% over the last year alone – we must maintain this momentum.

“A key way we’re doing that is by looking again at the land government departments own, with enough land released over the last Parliament for 103,000 homes.

“Over the next 5 years, we’re going to go further and faster – but where Whitehall is leading, town halls should follow, ensuring their land can be put to good use to deliver new homes across the country.”

Releasing land for housebuilding
Housebuilding is an important part of the government’s long-term economic plan, with starts at their highest annual level since 2007.

During the taskforce meeting the Secretary of State will highlight how enough formerly-used, surplus public sector land has already been released for 103,000 homes – surpassing the Prime Minister’s original target set in 2011.

But over the next 5 years, the government will work to release enough land for a further 150,000 homes – equivalent to the same number of homes in Wakefield.

The Department for Communities and Local Government and its delivery agency, the Homes and Communities Agency, have already identified around 150 sites, enough for 14,000 new homes, which can be made ready for sale for house building – on top of the 146 sites they have already released in the last 5 years.

Mr Clark will urge ministers at the taskforce to go further and look again at the catalogue of sites they hold, ensuring every possible plot is being released for housebuilding.

But he will also argue that councils, as a significant landowner, should play their part.

Government accounts show that in 2011, councils held £223 billion of assets – of which £108 billion was in land and buildings.

The Housing Bill, announced in the Queen’s Speech, will require local authorities to establish and maintain a register of brownfield land suitable for housing development, which will include their own land.

Already some councils are releasing land, including:

But the Communities Secretary will argue that more councils should be releasing land for housing for the benefit of their local residents as well as those looking to move into their area.

In June 2011, the Prime Minister set a target that enough formerly-used surplus public sector land be released for 100,000 homes. In March this target was exceeded with enough land for 103,000 homes released.

The release of land was:

The government is also working closely with the Mayor of London to set up a new Commission for public sector land. Working together with landowners from across the whole public sector, the London Land Commission will drive forward the disposal of surplus public land in the Capital, boosting the supply of much-needed new homes.

Figures from the Whole of Government Accounts show that in 2011 to 2012, councils held £223 billion in assets, of which £108 billion was in land and buildings. 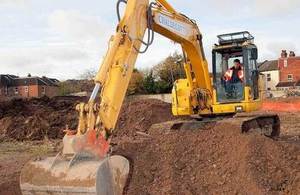