Green villages that can create 48,000 homes get backing

14 new green villages that can deliver more than 48,000 homes in England have received government backing.

In an expansion of the existing garden towns programme, developers will be granted access to a £6m fund over the next two financial years to accelerate the delivery of the first round of new settlements that will be located from Cornwall to Cumbria.

The Government will also release £1.4m to support the delivery of three new garden towns that will be built in Aylesbury, Taunton and Harlow & Gilston.

This means nearly 200,000 new homes can be provided in total if the previously announced green towns at Ebbsfleet, Bicester, Basingstoke, Didcot, north Essex and north Northamptonshire are considered.

“Locally-led garden towns and villages have enormous potential to deliver the homes that communities need. New communities not only deliver homes, they also bring new jobs and facilities and a big boost to local economies.”

The new garden projects will also have access to infrastructure funding programmes across government, such as the new £2.3bn Housing Infrastructure Fund announced in the November Autumn Statement. After completion, the villages may vary between 1,500 to 10,000 homes and the towns will be of more than 10,000 homes.

The Department for Communities and Local Government said due to the high level of interest from developers, the Government is releasing an additional £1m in 2017 and may run a further call for expressions of interest for other places with proposals for new garden projects.

By 2020, more than 25,000 housing starts are expected in government-backed garden villages, towns and cities. Homes are already being built in several locations, including Bicester, Basingstoke, Didcot, Otterpool Park in Kent, Ebbsfleet, Aylesbury, Taunton and North Northants.

The 14 new garden villages are:

The 3 new garden towns are: 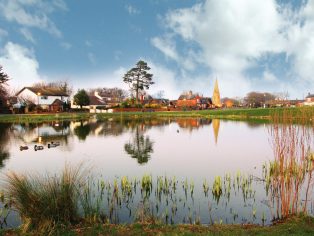